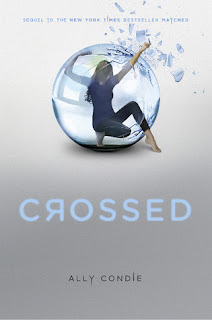 Summary
Rules Are Different Outside The Society

Chasing down an uncertain future, Cassia makes her way to the Outer Provinces in pursuit of Ky--taken by the Society to his sure death--only to find that he has escaped into the majestic, but treacherous, canyons. On this wild frontier are glimmers of a different life and the enthralling promise of a rebellion. But even as Cassia sacrifices every thing to reunite with Ky, ingenious surprises from Xander may change the game once again.

Narrated from both Cassia's and Ky's point of view, this hotly anticipated sequel to Matched will take them both to the edge of Society, where nothing is as expected and crosses and double crosses make their path more twisted than ever.

I really enjoyed this second book of the Matched series more then the first. This book kept me interested from beginning to end, unlike the first book, which dragged on a bit too much. I just hope the last book of the series is just as good as this book. At least i've now figured out what an Aberration is in this book , although I still don’t know what exactly an anomalies are.
There are more settings in this book then there was in the first book of the Matched Series. It takes place at first in two separate locations, because Cassia is located in the society and Ky is in the outer province’s. When the two are reunited, that meet in canyons, called carvings in the book. They spend a lot of time in the caves of the carving and in the abandon houses that people called the Famers use to live in.
The plot takes place after both Ky and Cassia leave the Oria, which is a city in the Society.  Ky knew right away when he was sent to the outer provinces and told to act like a Farmer it was all a lie. He and other aberration were sent there to die when the Rising attacked. He knew right away the only way to survive was to find a way to escape. As for Cassia, she did stayed in the society for as long as she could. However, when she figured out a way to get to Ky, she took that option, leaving with a girl named Indie. The whole story is about the journey of Cassia trying to find Ky, then trying to find the Rising soon after.
Cassia has a new way of thinking in this book then in the last book. This book she thinks what’s best for her and Ky to be together and goes against everything the Society wants of her. She only wants to be with Ky, not who the Society wants her to be with. So when she hears about the Rising she wants to join because she knows they would try to put a stop to how the Society runs things.
Ky is more open in this book. He tells Cassia the rest of his story. Well most of it. He also does what’s best for him, even when it meant feeling guilty for doing something he never thought he would do. You also learn more about his parents and their involvement with the Rising.

Both Cassia and Ky have grown more closer together in this book after finding each other again after being apart for so long. They do show their love for each other more in this book as well which was really cute. Not to mention that even when Ky thought he wouldn’t be with Cassia because of what she wanted to do, he still went to her. Even though he trusts nothing and no one, he does trust Cassia and would follow her in the end.

4 out of 5 Howling Wolves