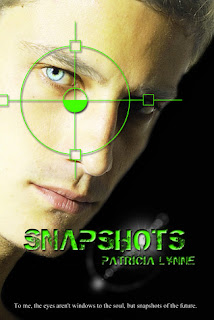 I got through this book rather quickly. Even within the writing, some parts in the book moved to fast, while other parts of the book moved at a normal pace. The writer also tends to skim over what seems to be key events, and I wished that they had gone into more depth about those events. Otherwise this alien book was interesting, featuring of gang involvement and scientific experiments on our main character.

The book centers around a character called Cyclop, taking place in a gang's house. He’s a member of a gang that he has been in since he was a kid when the leader took him in. Everything was fine with him being in the gang until in-gang fighting broke out. Cyclop tried to help his gang, but in the end they threw him out and then he had to learn to live on his own. Its then that he and Amber, our female lead, grow even closer. Things were starting to look up for him, until he began to hear a voice talking in his mind. He hears it almost everyday, which aggravates his nightmares. Then he learns that his master is looking for him and will get him back no matter what.

The reason he’s called Cyclop is because he keeps one eye covered with a bandana. If he doesn’t do this, every time he looks into someone’s eye he would have visions of the future. Cyclop is a really good guy and he really doesn’t belong in a gang. You can tell this by the way he goes to a gym to train to hold in his strength so that he doesn’t hurt anyone. He also thought at first that he was only interested in men because of how he had dated one of the gang members. Though that changed when he met Amber and realized that he was bi. This is a Young Adult book and there is no sex in this book, only mentions of it.

Amber is a sweet Asian girl who falls for Cyclop. At first she is weary of Cyclop because he is in a gang. Though soon that changes when she sees a different side to Cyclop. Beyond the gang she sees the sweet guy. She even believes him and trusts him when he tells her the truth about his powers.

There is romance in this book, but it doesn’t center around it. Cyclop and Amber are an interesting pair because they are both different in some way. What attracted Cyclop to Amber was because she was the only Asian in his area. At first he’s confused thinking he was only gay but soon realizes that he is bi and that he can love Amber.

Author
Patricia Lynne never set out to become a writer, and in fact, never gave it any thought during high school and college. But now she can't stop writing. Patricia lives with her husband in Michigan, hopes one day to have what will resemble a small petting zoo and has a fondness for dying her hair the colors of the rainbow.