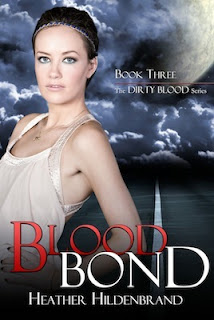 Then again, without hybrids, I wouldn’t have Wesley St. John.

Packed full of action and romance, I couldn't get enough of 'Blood Bond'. It was not what I was expecting when I began to read the third book of the series. To learn that Tara is getting closer and closer to turning into a wolf, and that the hybrids (which are usually half hunter/half wolf, but occasionally wolf/human hybrids) are now after her it was just amazing. I did find the bad guy in this book a bit too simple and easy to take care of, so I didn't really care much for the bad guy. The hybrids made up for the poor villain.

The story line mostly takes place at Tara's home, and Jack/Fee's home. This was due to her being grounded after she traveled to Nevada to find someone who could save George.

The story was well paced and exciting. Tara is getting used to her now dangerous life. As summer holidays arrive, she and Cambria plan to stay at her house for the summer. With excitement of seeing Wes again, she can't wait to get home. But, she can't help but feel sad for leaving Alex.  Back at home, with her over controlling mother, she finds peace at Jack and Fee's place. There, she can spend time with her friends and Wes. She learns that George is getting sicker from something Fee gave him to stop him from transforming. It made Tara worry for him, but it became worse when he began to feel stronger. It meant that he was slowly losing his humanity and becoming a wolf. It made Tara more determined to find a way to save him. Its not long before she leaves and learns that Miles (a cousin and bad guy from book two) was telling the truth on how to save George. The only problem now is that they are now bonded, meaning they can feel each others emotions. It could also mean that they're more then just pack members. It's not until later that Tara learns more of what's happening to her and how to save all the Hybrids. The Hybrids are uncontrollable, because of how they don't have their humanity. They lose themselves in what they are doing and only follow one leader, who is making them do bad things. She saves them, but there was huge consequences to that, that your going to have to read to find out.

Tara is frighten about her becoming a werewolf even though it's a part of her. She has grown much stronger as a person, but still has lots of fears to get over. Being afraid of what she's becoming. I guess would be normal for anyone, especially since she doesn't know what her friends and family would think of her. Not what I expected from her at all. She knows Wes is also a werewolf and half Hunter, like her, only he could change into a werewolf a lot longer then her. It's because she only now starts to feel the change coming that makes her fear it. She also is very open with Wes she tells him everything and doesn't lie to him any longer. Tara also meets with another changing situation when she learns what her blood can do and what it can do to save the hybrids.

Wes is his usual strong, protective self, but unlike in the first and second books, he is more trusting of Tara and he will let her do things if she thinks she can do it. He loves her so much that he would never again tell her a lie. He also doesn't become to jealous with Alex any longer, because he knows that Tara loves him more then Alex.

Alex is holding a lot of secrets in this book. His character flip-flops. In the second book, he trained Tara and opened up with her about his past. Now, he keeps changing his story. He makes you believe that he loves Tara despite her being a 'dirty blood' (half werewolf/half hunter), but he hates werewolves and would rather see them dead. Then he saves her and tells her that he is actually been working for Tara's grandmother the whole time and wasn't planning to do any killing. So you start to believe he is a good guy, but the ending will leave you confused with what his real plans and motives are.

Cambria is still Tara's best friend. She supports Tara with the problems with her mom and Wes. She helps Tara come up with plans. Cambria's not perfect though, and she does crack under pressure. She tells people the truth about Tara, but would never turn her back on her.

George use to be human, but after what Miles did to him in book two, he needs Tara's help or he would die. He cares a lot for Tara, even lobing her at one point. He's becoming closer to her as a friend, and even becomes a pack member.

Jack and Fee are leaders to the Cause (to help Hunters and Werewolves work together). They care a lot for Tara, Wes and everyone else that comes to the house. They are like a second parents to everyone they meet, and they know a lot about what happen in the past between Werewolves and Hunters. They are never changing, becoming rocks for the otherwise unstable characters.

With everything going on in Tara's life, there is hardly time for her to have any time alone with Wes. When she does, she almost loses control over herself, due to the strong pull between the two of them. It gets worse later when she learns that after exchanging blood with George, he now feels her emotions. So she can't be with Wes without feeling embarrassment. Oh, and she still cares for Alex. (Come on Tara, this isn't 'Twilight'! Pick a guy!)