Neither by Chelsea M. Cameron Review 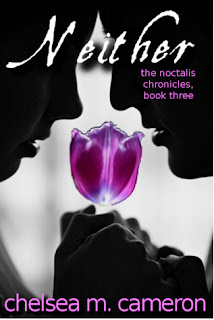 Summary
For Ava-Claire Sullivan, it's bad enough that loving vampire Peter Mackintire might kill him the rest of the way. His equally immortal mother keeps trying to murder her so Di won’t lose another of her precious sons.

A promise Peter made nearly a hundred years ago means loving someone will kill him. Ava's done her best to either end her own feelings or stifle his, but she's losing; he's falling harder for her every night. She hasn't found a way to free him of his promise yet, and it's almost too late.

But her own terminally ill mother is dying fast, and now Ava-Claire is forced to choose between the last days of her mother's life and freeing Peter as they wait for Di to come up with yet another plan to destroy their love, and Ava’s life.

Three books into the series, and I still love it. This story was written with a good, steady pace throughout. The author knew what was needed to make her readers love every moment of this book. In this book, the point of view changes between three characters this time. It continues to switch from Ava’s to Peter’s, but now includes the POV of a new character, Brook. I must say, I grew attached to her and her story. I couldn’t wait to read what happens to her.

A brief recap on the previous plot and character connections. Di is Peter's 'mother', as she was the one who turned him into a vampire (noctail). Anyone else she's bitten, such as Victor, are Peter's 'brothers'. Peter made a promise to Di that he would never love anyone more then Di herself. If he does, then he will burst into dust, thus ending his immortal life.

The plot line focuses on Ava and her connections trying to find a way to break the promise, which would freely let Peter love her. Adding to this already tense situation is Victor promising Di that he would kill Ava within a year. Ava's mother is getting worse, which adds to her stress. They call on the help of friends from India to try and stop Di. With the help, Ava and Peter relax more, and Peter starts trying to be closer with Ava, but not going to far to risk dying. During all of this you meet Brook, a new character that has connections to Ivan, the noctail that died in book Two. You find out she is also a noctail, and that she is after Ava. This changes when she meets Jamie, a friend of Ava's. Jamie's kind to her, and despite killing kind people in the past, Brook finds herself unable to kill him. If anything, she feels a draw to him and his blood.

Ava's stressed out and starting to get desperate in this book. Between the issues with Peter and her mom, she's beginning to wish that she can just escape everything. Even the seeming mundane stress of going to school is starting to get to be too much for her. Peter is her rock, and without him she might crumble to pieces. Even if he can’t say those three words she wishes she could hear from him, she still can see that he cares a lot for her. She even ended up asking Peter turn her into a noctail whenever she wanted, and he agreed with her right away. Somehow, I see this coming to bite him in the ass later on... (Now THAT would be an interesting way to become a vampire!) However, being the gentleman he is, he just wants to make her happy and if that’s one way of doing so he will.

Peter surprised me in this book, showing much more emotion then in the past. It comes with noctails not having much emotions. It shows how much Ava has affected him into have feelings of any kind. He cares a lot for Ava, and would do anything for her. He just wants her to stop hurting, so even if he can’t fully love her he tries his best to show her through actions and few words.

Tex is still Ava’s friend and still doesn’t know how to stop talking. Sometimes she’s insensitive. Oh, and she's now been claimed by Victor. She heard all the warnings that Ava gave, but still decided to ignore her. Now Victor has her for life, and she has to learn to control the disadvantages that comes from being claimed by a noctail. Victor is better at imitating and perfecting his emotions, while Peter had to be taught how to laugh by Ava. Probably because Victor is much more closer to his human side then Peter is. This allows him to be able to flirt like a normal guy with women. He cares a lot for Tex, and you can see that by how they react to each other.

Brook wasn’t like any other character before. She’s different, and that’s probably why I grew attached to reading her story more then the main story. She’s human at first, but isn’t one for long. It does surprise me how she ends up in Ava’s home town and who she becomes friends with. She knows noctails don’t have emotion, but she feels strongly for Jamie, a human she met at the side of a road. She soon starts spending more time with him, eventually telling him the truth about who and what she is. Meeting Brook first surprises Jamie, but it doesn’t take long for him to fall for her. He’s afraid of her and loves her at the same time. Even when Brook attacks him, he knows it was a mistake and doesn’t blame her. He’s a good guy and Brook sees this, leading to her sparing his life.