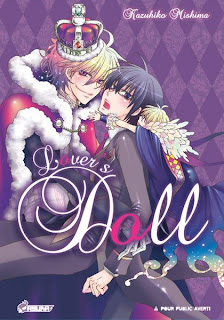 
Summary
When Shin hears about a doll known as the "bloody doll" from his friends, he can't help but be curious. Instantly falling in love with the figurine he decides to buy it, but there are rumors about the doll and how it got it's name. It can supposedly move and talk, one owner even claimed that it drank his blood.

Unfazed, Shin buys the doll anyway to find out that the rumors might not be as ridiculous as they sound...


My Thoughts on the Manga
This manga made me cry, laugh I was just so into this manga. The story line was great and even the way the characters were drawn was beautiful. It has the one of the best happy endings I have ever experienced in reading manga and let me tell you not many Manga books end as great as this one did.

In this manga you meet a boy name Shin, who is sitting with his friends one day when they start to talk about a doll that is always being put up for auction. They call it the bloody doll because it would start to move around making the owners freak out and put the doll up for sale. This catches Shin's attention and when he see's the picture of the doll he fell in love with it. He buys the doll and it wasn't to long when the doll suddenly moves and calls Shin his master. Shin is startled at first but unlike the dolls last owners he doesn't call the doll a monster. The doll is surprised by this but Shin's feelings never changed it still loves the doll. Shin soon names the doll Shimeji which means small mushroom, of course the doll did say for Shin to name him and he loved the name in the end. The doll can move around in small form but can appear in a larger form like a normal human, which makes it even more cute for the two of them because then you see them kiss and it's all adorable.

It's cute when the doll(Shimeji) starts to feel things for the first time, like love. Shimeji doesn't know what love felt like until he met Shin and would always tell Shin he loved him. Another emotion he experience for the first time is Jealousy. Which happen when Shin was with his friends and was laughing with them but Shimeji couldn't do anything but sit as still as a doll so he reacted by pushing over a vase. It was a cute reaction but it got Shin mad at Shimeji, causing Shimeji to react by hitting Shin. I can't spoil any more because what happens next is so sad and cute you would want to read it yourself. Not to mention the secret ending was surprised by who is on top and who is on bottom.

Then there was the story at the end of the manga that was so cute,
I have to write it down for you guys:


Once upon a time,
There was a doll that only needed
his master’s love to develop a soul.

But because he was so unique,
he was feared by the people around him,
and became very lonely.
Then oneday, he met someone who would accept all of him for who he was,
a master gave him many new experiences and emotions.

After many trials,
the two discovered their mutual love for one another,
and swore to remain together forever.

Many long years later,
the master’s life was finally nearing its end… and even then,
the doll remained at his master’s side.

…And when his master finally passed away,
the doll never moved again.

Those Two must have gone to heaven together.
Design 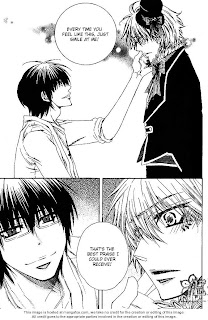 Overall
It's a cute story and you will like it, it's cute and funny and even sad near the end. You will love every moment of this manga and I highly recommend it.