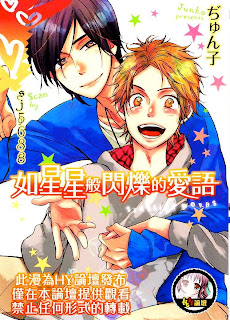 Summary
High-school student Subaru wouldn’t reject a sexual favor, but dating is out of the question when he’s not in love. Stumbling upon a beautiful painting in school, he knows he’s found his first love – the artist behind the work. But winning the heart of his love interest isn’t going to be easy, particularly with his promiscuous lifestyle…

Review
I actually really enjoyed this manga, it was the right mixture of both remeberable characters and great story line. Subaru is a bit of a slut thought that's the only thing I don't like about this book but he changes at least. I wish there was more but sometimes good stories comes in one volumes.
I like how Subaru could understand Nagayama paintings, even when no one else could. It just shows how much Subaru fell in love with Nagayama. Though Nagayama reaction to Subaru was quite and distance but soon Subaru brought out his voice more and more, until he fell in love with Subaru as well. Nagayama reminds me so much of myself in the fact that when I sometimes draw, I draw my true feelings and you will know if I'm happy, sad or Angry. So I like Nagayama a lot in this manga.
It's a great love story and a bit heavy on the sexual content so it's diffidently not for everyone. Though if you like a good cute story with sex in it I do recommend this book. It will draw you in right away from start to finish. 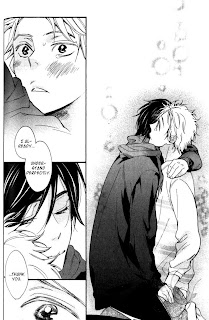 The black hair boy is Nagayama and Subaru is the light hair boy. As you can see two totally different characters. None of the characters in this manga look the same. Not only that but the style isn't all that bad either. I like this Mangaka style and how she draws every character different. Though some pages during the sexual parts are confusing but besides that perfect.