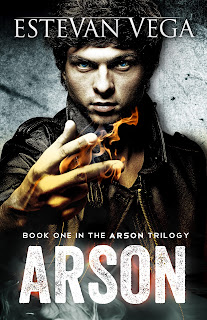 ARSON GABLE FEELS LIKE A FREAK. HE CAN CREATE FIRE. HE NEVER ASKED FOR IT. HE NEVER WANTED IT. BUT HE CAN'T SHUT IT OFF.

Before now, three things were true: he both loved and despised his grandmother; his life was going nowhere; and he was alone. But when a strange girl--who feels more normal behind a mask than inside her own skin--moves in next door, Arson hopes to find something he's never had: purpose. After years of living in fear, he will be forced to confront his haunting past and embrace the unknown as he walks the fine line between boy and monster. Edgy, realistic, and breathtaking, Arson, the chilling chronicle of an isolated teenager with unimaginable ability, is set to ignite the hearts and minds of a new generation.


I was surprised at first how fast I was reading this book. I’m not use to reading books from mostly a male’s prospective, but Arson was a very interesting character. Though his life was hard and it made me mad over the things that happen in it, I did enjoy reading this book. A big flaw is that it shifts between character perspective too much. It would have been fine if it was mostly from Arson and Emery’s perspectives, they are the primary characters, but they also told the perspectives of Arson, Emery, his grandmother, and Emery’s mom and dad. I was just not interested in all those characters perspectives, I just wanted to focus more on Arson and Emery.

Arson’s life isn’t easy. His grandmother loves to beat him, he has a boss that doesn’t know anything about proper hygiene, and there's a who won’t give him the time of day. Added to the mix is the fact that he can light fires (go figure, his name is ARSON, as in, illegal lighting of fires), nothing is going well in his life, and multiple times he wished he could just die. He is a good person, I can see that, but at times he listens to the words people call him. I think if people would trust in his own words more he wouldn’t feel like the way he does.

Emery is the new girl in town, and she’s a bit odd. She wears a mask everywhere she goes, not wanting anyone to see her face. This only makes people stare at her more by her wearing that mask. Even I would stare if I lived in that world. She wears the mask because she doesn't like how she looks, and shes's not brave enough to face the direct stares from peope looking at her physical flesh. She hides behind her mask to believe everything is okay and to act brave. She has a huge sarcastic streak that is a bit funny at times. There are times that she talks to Arson without the mask, showing how brave she really is.
Arson’s grandmother is a bit weird. One minute she’s like anyone’s grandmother all nice and gentle, and then her expression changes and she’s calling him a wretch and flung a plate at him. I can’t help but despise her for what she does to Arson, for hitting him for things he can’t seem to understand. She tells him she loves him the most, but turns around and beats him. You know something’s wrong with her and so does Arson, but your just not to sure till the end.

I loved this book and how supernatural it was, although this book doesn’t have to much explanation on Arson and why he can do the things he does. This seems like a set up for a sequel to me. However, the book almost seemed like Emery's story, as it talks more about Emery and what's going on her household than what's going on to Arson and his. This book takes place mostly where Arson lives and at his work. He lives by a lake and spends a lot of time in the water, which is how Emery finds him. The town is medium so that everyone knows everyone, Emery also describes it as a dull town. It was sad to learn of how Arson grew up with his grandmother and the mistakes he has done in the past. Many bad things happen to Arson, but I like how he and Emery interact with each other when she's introduced. Their relationship evolves from being sarcastic towards one another to actually liking each other. Arson tries to help Emery deal with her problems, while trying to keep what he can do a secret. This book will leaving you wanting to know what will happen next and it’s a good thing.

a Rafflecopter giveaway
Posted by Unknown at 8:33 PM