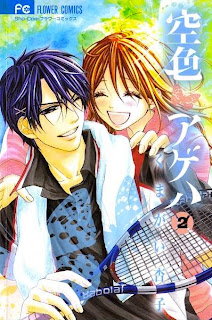 Summary
When Ageha was younger, she watched a tennis game and was affected by a passionate young tennis player. Years later she was determined to become the number one tennis player and to join the tennis club in her new high school.  Only to find out that her school doesn't have tennis club any longer and the boy she met years ago is sitting right next to her.

Review
It was an alright read, it went by a bit fast and ended to soon. It would have been better if the author made this manga longer to at least show more tennis matches because all I saw was two tennis matches and a bunch of practices, in a span of 8 months...how the hell did it go from her starting at the new school to eight months later. It could have also done better because it could have gone into depth on some of the other character in this manga. It also annoyed me to see this one girl that Ageha saved from getting rape, never mention that inncident again. They just go on living their lives like nothing happen the next day.... Other then that it was a cute story and I like how Ageha started to pick up on the moves that Takeru was teaching her. Not to mention how she started to get Takeru to fall for her.

Sakaki Takeru is really mean at first towards Ageha who loves Tennis because of him. He even destroyed her tennis racket(though that doesn't faze her at all). Later though when he see's how serious she is about the sport he begins to get better at showing his good side. Though he is still hard on her he does care a lot about her and tries what he can to make her better at the sport. Ageha happy that she can be playing Tennis looks up to Takeru and does everything he says for her to do.

Even if their is only two sports matches you can see how much she has learn from him and takes down her opponents. I only wished to have seen more of a development between her and Takeru and maybe more tennis matches. 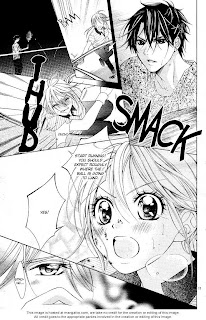 The mangaka has such classic Shojo style drawings. With the style of Flowing/detailed hair and bright eyes it really does show how much detail she puts into her characters. There is also details in the characters movements so you know that they really are playing tennis.


Rating
3 out of  5 Howling Wolves