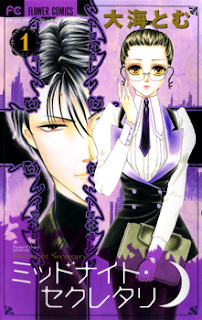 
Summary
Kaya Satozuka is a brilliant secretary who excels at her job, which is why she doesn’t bat an eye when she’s assigned to be personal secretary to Kyohei Touma, the very difficult managing director of Touma Foods. It doesn’t faze her when her new boss seems determined to make her fail, and she even manages to take it in stride when she discovers the secret behind his prickly behavior…he’s a vampire! But while Kaya easily adapts to late nights and keeping a schedule of his “dinner dates,” will her ultra-competence help when Kyohei’s smoldering gaze starts turning her way?!

Review
This manga became a real shocker when I saw it in the catalog my dad gets because of how he runs a comic book store. This manga was one of my high favorites and I’ve read almost everything from this manga artist. She enjoys writing about supernatural characters from Witches to werewolves to ever Vampires which is what this manga is about. No not your normal vampires but a hot sexy vampire who is a boss and will threaten his secatary in keeping his secret.
Volume one has been interesting so far in my rereading of this manga. Kaya has learn her boss true identity. Plus Kyohei may seem ruthless towards people and even to her but he does show a soft spot which you see quite a few times.

Kaya Satozuka will do anything to hide how she truelly looks like. From biding her hair up to wearing fake glasses. She just wants people to look at her and think that she fits the job as a secetary. She never thought that she would be a secretary to a vampire. Spying on her boss leads her to learn of what he is and being brave she tries to learn how to propally take care of him. Which is what I like about her, she didn't run away but stood her ground to keep her job. She is not a one dimentional character and she has a lot to learn about Vampires which I'm excited to read in the up coming volumes.