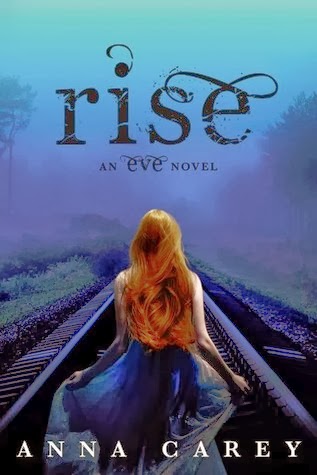 Summary
How far will you go when you have nothing left to lose?

When she lost her soul mate, Caleb, Eve felt like her world had ended. Trapped in the palace, forced to play the part of the happy, patriotic princess of The New America—and the blushing bride of her father's top adviser—Eve's whole life is a lie. The only thing that keeps her going is Caleb's memory, and the revolution he started.

Now, Eve is taking over where Caleb left off. With the help of Moss, an undercover subversive in the King's court, she plots to take down The New America, beginning with the capital, the City of Sand. Will Eve be able to bring about a new, free world when she's called upon to perform the ultimate act of rebellion—killing her father?

In Rise, Eve must choose who to leave behind, who to save, and who to fight as Anna Carey's epic tale of romance and sacrifice in the chilling dystopia of The New America comes to a stunning conclusion.

Review
The novels found in the Eve series are definitely something that readers should pick up - they contain great battles of survival and sacrifice. These have found spots in my personal list as some of my favorite dystopian novels.

The protagonist, Eve, has really went through a dynamic change from the first book to the last. She had started out as a sweet and innocent girl who hardly knew the hardships found hidden by rose-tinted glasses, but along the way of the adventure, she has matured and learned much about love and sacrifice. She has lost and gained friends, but where one would think there would be romance, there is actually none found within the pages of the books – only adventure and action. While some events were hard and forced her to harden, it all resulted in a character who became determined and strong enough to stop the leader of the world. The leader being her own father.

The ending of this book was indeed great – it really grabs and pulls you in where you can't help but become sadden when you find out that the series is ending for good. It’s remarkable on how much imagination the author put into this series and I hope she has more books planned, because I’m definitely picking up more of her books.