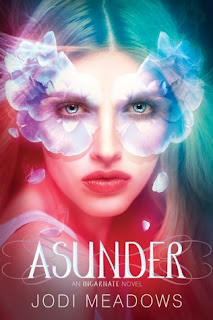 Summery
DARKSOULS
Ana has always been the only one. Asunder. Apart. But after Templedark, when many residents of Heart were lost forever, some hold Ana responsible for the darksouls–and the newsouls who may be born in their place.

SHADOWS
Many are afraid of Ana’s presence, a constant reminder of unstoppable changes and the unknown. When sylph begin behaving differently toward her and people turn violent, Ana must learn to stand up not only for herself but for those who cannot stand up for themselves.

LOVE
Ana was told that nosouls can’t love. But newsouls? More than anything, she wants to live and love as an equal among the citizens of Heart, but even when Sam professes his deepest feelings, it seems impossible to overcome a lifetime of rejection.

In this second book in the Newsoul trilogy, Ana discovers the truth about reincarnation and will have to find a way to embrace love and make her young life meaningful. Once again, Jodi Meadows explores the extraordinary beauty and shadowed depths of the soul in a story equal parts epic romance and captivating fantasy.

Review
I can’t get enough of this series. How can you not like a story that takes place in a alternate world? Even though this book has hardly any action, it did have lots of mystery, and the background story of Janan. I’ve also notice how most of the names in this story is unisex. I guess it makes sense because they are reincarnated, and they won't know if they'll be male or female in their next life.  A lot of name have a sci-fi, exotic sound. For example Dossam, Sarit, Deborl and Menehem.

This book takes place mostly in the city of Heart. Heart is surrounded by white walls, filled with people who are always reincarnated. The people believe in the person called Janan, who allows them to be repeatly reincarnated. Ana doesn't like living in Heart, because she doesn't like how the walls pulse like a heart. They don't travel to far away locations, just to Menehem’s lab (but they don't stay there long), as well as Purple cottage (a place where Ana grew up in and isn't full of much happy memories).

The author’s imagining this alternate world is rather interesting. Some things would be normal to us, but this world has Dragons, Centaurs and a creatures called Sylph (they're finally explained in this book). I hope in the next book we actually get to see Centaurs. So far, they're just talked about but have no appearance. Maybe they're symbolic of something? I do love how Ana is slowly digging more deeper into Janan and the people of heart. Learning about their past. I’ve been wondering about this civilization since the first book. With Ana being a new soul, she has the curiosity that other lack. She wants to try and find answers. My hate for Janan even grew more in this book when I learn that the people of heart forget things about their own city! It’s frustrating because Ana has to keep explaining things to people, only to have them forget. I just know I will be jumping for joy when Ana takes down Janan.

Ana is just as strong in this book as she was in the last book. She isn’t a little girl anymore, and it’s annoying to see people treat her as a little girl. It's only because everyone is over 5000 years old. At least she has Sam. It's the one thing that I do like about her life. That and how she doesn't let people push her around. I do hate what she learned in the event she dies. I hate it, and I only hope the last book has a good ending for her. I also like how she finally learned that she can love things. Even if she is a new soul, she does have a soul. I love the symbolism of the blue roses and how they connect to Ana. They are new, just like her. The blue roses on the front cover of the book makes total sense now.

In the first book, we learn about how old Sam was. He's average,  because everyone else is roughly the same age. It wasn't shown was how much age makes a difference until this book. You can see how much Sam loves Ana in this book. He stays by her side no matter what, even when people are telling him he shouldn’t be with her and how wrong it is to be with her. It’s a good thing, because I would hate him if he thought that way. She may be not as old as him, but she is old enough to make her own decisions. She can decide if she's old enough or not.