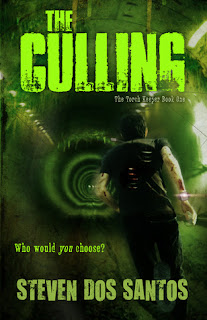 Summary
Recruitment Day is here...if you fail, a loved one will die...

For Lucian “Lucky” Spark, Recruitment Day means the Establishment, a totalitarian government, will force him to become one of five Recruits competing to join the ruthless Imposer task force. Each Recruit participates in increasingly difficult and violent military training for a chance to advance to the next level. Those who fail must choose an “Incentive”—a family member—to be brutally killed. If Lucky fails, he’ll have to choose death for his only living relative: Cole, his four-year-old brother.

Lucky will do everything he can to keep his brother alive, even if it means sacrificing the lives of other Recruits’ loved ones. What Lucky isn’t prepared for is his undeniable attraction to the handsome, rebellious Digory Tycho. While Lucky and Digory train together, their relationship grows. But daring to care for another Recruit in a world where love is used as the ultimate weapon is extremely dangerous. As Lucky soon learns, the consequences can be deadly...


Review
This dystopian tale is plain crazy! I think it can best be described as as "Hunger Games" with a "Battle Royale" twist. I loved the book, but I found the ending a bit depressing. It leaves you wonder the fate of our main character, Lucky (Lucien). After the trails these characters go through I don’t know how they would come out sane. I think I would go crazy by what happen.


"The Culling" takes place in the town of Perish, which is under the control of something called 'The establishment.' It’s not the prettiest of places to live in. Picture the Victorian era, where to get rid of trash and human waste they dump it out windows. This is also a world were being 40-years-old is considered being really old. Oh, and they love putting small children in places to be bought and used. How I hate this hell whole of a society. It takes place in the future, after a great war that has devastated society. Interesting how war leads to dystopian civilizations that brutalize the young and innocent... What I do like about this world is that they don't bat a eyelash at the fact of gay lovers, which isn’t like our world at all.


The author knows how to write and create a gripping plot. Every moment of this book is intriguing, pulling you in, making you want to know what’s going to happen next. There is a lot of twists that leave you guessing, because nothing happens how you expect it to happen. The thing that’s similar to "Hunger Games" and "Battle Royale" is the thing called the 'Recruitment Day'. During this event, the Establishment chooses five people to be Recruited and compete against each other to be able to join the imposer Task force. During the competition, if they fail on of the trials then they have to choose which of their love ones die, as the name “The Culling” suggests. . This “Establishment” people are great people, aren’t they.


Our main character Lucian, or Lucky as his brother and a few others call him, is a really great guy and a good older brother. He would do anything to protect his brother, who is his only family left. He took risks to go meet his old friend, who is now called a Perfect (someone who is a high ranking member of society). Unfortunately, he learns the hard way that friendship has little value in this society. He becomes a stronger person for this.


This book is full of interesting characters. Some of them, you root for as they go through their trials. Others you want to throw off a cliff yourself. The names of the other Recruits are Cypress, Ophelia, Gideon and Digory. They each have their own distinct personality. They range from kind, to cold, to just plain crazy.


Digory is someone I really love in this book, and I could see how Lucky became attracted to him. He’s smart and loyal, but holds secrets that he doesn’t tell anyone till almost the very end. Digory is technically Lucky's rival in the trials, both fighting for the Recruitment spot and for the lives of their families. He should be looking after himself and his loved one, but he instead looks out for Lucky and protects him. I loved how he and Lucky slowly came closer together as the story went on. Their relationship grows and changes throughout the story. I can't wait to read future books and find out what happens to Digory, as his ending was left open to interpretation.