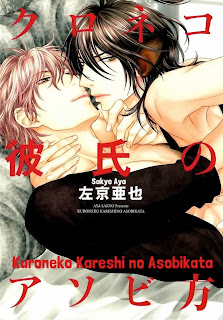 Summary
The werecat Shingo is able to change into a black cat, and as long as someone has the looks and body that he likes, he'll sleep with just about anyone. Falling for Shingo because he was overwhelmed by his strong masculine aura is the No. 1 popular actor, Kakami. Amongst all the playful teasing and messing around between the two, Kakami suddenly shows his beastly nature...?!

Review
Yes this manga is a mature yaoi manga is a 18+ yaoi so if you haven't tried to read yaoi before I suggest not to start with this manga. As well as if you don't know what Yaoi means I recommend looking it up so you don't have a heart attack hehe! 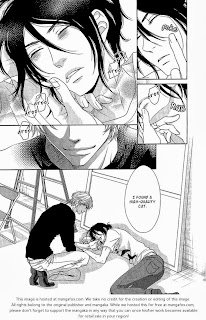 It's been a while since I've read a manga that had were animals in it. This one has werecats and let me tell you they are so very cute. As the main character tells us, there is only 0.01% of the population on earth that is werecats. Some people know about them, others don't because of how rare they are. So for Shingo to meet another werecat is really rare.

Shingo is a werecat and has been on his own for a very long time. He was abondon quite a few times and has learn not to trust people. He would let people in but he knows they will leave him sooner or later. So when Kakami comes along he thinks the same thing even when Kakami opens up his heart. Kakami has to work hard to get Shingo to trust that he will never leave him and that's what made me love this story even more.

Kakami is a werecat as well and he knew right away who Shingo was.  Kakami has a relentless nature which is cool considering he's also a leopard werecat. He fell for Shingo on the first day they meet though he doesn't know this till later. In the end he does anything to keep Shingo by his side, even when the guy wants nothing to do with love because of how scared he is.

This manga will leave you wanting more because of the hot sex scenes and the hot characters. You will love every moment of this cute love story.