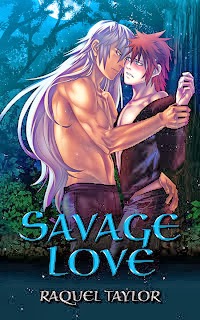 Summary
Welcome to the world of Nyw’Gaia where genetically engineered werewolves and vampires have battled for centuries. They fight to the death. They, most certainly, do not fall in love…

An illegally made vampire in his father’s Nosferatu army, Prince Skyy Hi’daat leaves the city of Nocturne for the lush alien domain beyond.  He finds this world filled with exotic inhabitants who would just as readily kill him as look at him. He is unprepared for the desire he feels in facing the werewolf that is supposed to be his natural enemy. Ravished and then rescued, his vengeance knows no bounds for the creature that dared put his filthy paws upon him.

Cathedron is the city of Arachnae’s greatest champion. On a deadly stealth mission to infiltrate Nocturne and discover the source of the infection that is eating the world, he finds he cannot help but hunt Nocturne’s gorgeous dark prince. Skyy’s scent ignites his desires in a way that is strictly criminal. Remembrances of Skyy’s body fires his blood against every law, against his own common sense. The wolf is determined to have the vampire again and make Skyy his forever.

Against the heat of the passion that threatens to consume them both, Nyw’Gaia is dying. An ancient darkness is infecting the denizens of the world and killing everything in its path. Their love is forbidden, but only their love can save Nyw’Gaia now.

Review
I'm amazed by how different this book is by anything else I've read. Believe me when I say I've read tones of erotica books. Raquel Taylor is very discriptive in her writings, I can picture everything she discribes in this book leaving little confusion. The Science Fiction aspect of this book is what surprised me most. I didn't think there will be creatures I never dreamed of being in a book before now. From spider like creatures to creatures that were created by humans everything is unique.

The setting for this novel takes place on a world that is not ours. Yes humans inhabited it but it's very different from our earth. Many different monsters live on this planet from Spider people to werewolves and vampires (in which humans have created).

The main characters are interesting right from the beginning. Cathedron (can not pronounce his name sadly) is a werewolf but somewhat different. He can be half werewolf half human in a way that I've never seen before. In my head he's beautiful in this form. He is very straight forward and likes to think alot with his lower brain. He is strong and protective of Skyy. Skyy on the other hand for being a prince knows very little of what is happening to his world. Not to mention he falls pray to Cathedron right away and believe it or not they do have sex right when they first meet. Seeing they're relationship develop though was a plus.

If your looking for a book that is different from all other paranormal books out there. This is for you, be warned though, there is a lot of sex at the beginning of this book.

Short Excerpt
The wolf was covered in the pierced and tattooed designs so prevalent amongst the ruins of the First Colony. The markings denoted a complete surrender to savagery, a negation of even the faintest hint of civilization. Skyy had seen designs like them in the museums and art galleries of Nocturne. They were an intermingling of the human-like designs of the First Colony along with the artwork of the aliens that had populated the planet before the first human settlers had landed hundreds of years before. The werewolf wore inked bands across the hard muscles of his arms that might have favored the Celtic designs brought from Old Earth had they not been populated with ja’anaszi stones—tiny glittering jewels that radiated with the uncanny inner light found at the mined core of Nyw’Gaia. Ja’anaszi stones were illegal in the City of Nocturne, the tiny rocks imbued with a narcotic so strong it had been known to kill on contact. Once placed upon the flesh, the stones bonded with the skin and needed the aid of a skilled surgeon to be removed. Often whole limbs were lost in the procedure. And the werewolf wore enough of them to kill an entire human district. The stones were known to be a glittering white, the light inside them throbbing to the heartbeat of the wearer. The stones the wolf wore were an uncharacteristic blood red.

Raven hair slid in a straight black wave down the creature’s shoulders and inky eyebrows arched over long black lashes. His finely sculpted face, complete with smooth cheeks and high cheekbones, was the home of arched raven eyebrows, which rose to peaks over those incredible eyes. There was something so wild about the look of him that it captivated Skyy.

He could not look away as the wind picked up the long inky cape of the werewolf’s hair and played with it, jangling the multi-colored beads and tangerine feathers that decorated it. The picture was both spellbinding and incredible and the new vampire’s mind took its sweet time processing it all, down to the silver metal and ja’anaszi stone collar that decorated the beast’s throat. Still, not quite used to his new perceptions, Skyy found this creature as fascinating as the Trinity and his body reacted to its presence in much the same manner as he had reacted to the Three Moons. The beast sparkled, the blood red stones embedded in his flesh glittering like sustenance and Skyy was suddenly filled with the dark hunger that denoted what he was, but there was something else to it…a certain and undeniable lust of a completely carnal nature.

Outside of this rather clandestine operation, Raquel writes love and erotica in whatever form that pleases her. She truly believes that love conquers all. With pen and keyboard she creates worlds where only love can bring light to the darkness. She creates lovers who need one another and she brings them to readers who want to experience those worlds and those people.

She writes for the love of it, against all odds. And she will never stop creating.

You can visit Raquel’s worlds at: www.theroguepublisher.com