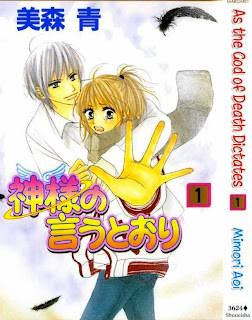 Summary
Ayumi is a 16-year-old who has a crush on her classmate, Musashi. One day, the God of Death appears before her, and announces that she has only one month left to live. There's no stopping the hourglass of fate! Life is short, girl, so love with all your might!

My Thoughts on the Manga
I gotta say I'm so disappointed that this manga hasn't been license yet even thought it's such a great story. The one company that could have probably license it (Tokyopop) went out of business here in North America. Since I love this manga a lot I will give you a link on where to read it below.

Ayumi is kind of a silly girl who lets the guy she has a crush on push her around. It's funny how she reacts to Musashi because first she thinks he's just using her for stuff but he's just being a boy who picks on the girl he likes. She also starts to think she's going crazy when she starts to hear and see things no one elses can. Soon she is told by the god of death that she has a month left to live and then she will die. At first she doesn't know how to react, she tries to ignore thoughts of that but then it starts to effect her school work. It isn't long before Musashi notices her acting weird and starts to help her think of something they could do to help each other. Musashi is like any high school boy, he picks on the girl he likes. Though when he learns about Ayumi's problem with the god of death, he starts to help her in any way that he can. As for the god of death he isn't the bad guy, he's just doing is job. He's really nice and a kind person who has always been alone. He really shows his emotion when he's upset, it shows when he cries for a cat he had to bring to the other word. He sweet and caring even though he has a bad job. He even falls for Ayumi and though his jealousy hurts Ayumi he soon learns this and backs off so that Ayumi can be with Musashi. There is a scene after the cat dies that Ayumi and the god of death is talking and she doesn't know what to call him. So she tell's him that she would give him a name but she didn't get the chance to because she was late for class. Though before Ayumi goes he tells her how he's excited to hear her name for him.

The romance is cute but sad because Ayumi only has a month left to live and being with Musashi is all new to her. It's cute when Ayumi firsts confesses to Musashi since it was a mistake at first and the next day Musashi ignores her. She doesn't know why Musashi ignores her but when she confronts Ayumi afterwards and she learns that he ignored her because he was embaressed. He confesses to her as well and they start dating. During this time the god of death falls in love with Ayumi and it's cute how he tries to deal with it. You will fall in love with the god of death even more so when you learn his name.

The plot is great, it's both funny and so sad. For one thing Ayumi isn't suppose to see the god of death but for some reason she does and the god of death is confused at first. Though later he tells them it doesn't matter if she can see him or not she still has to die in a month. This causes problems with Ayumi that she has to go through. During the two volumes you see how Ayumi and Misashi deal with her having a god of death on her and how Musashi would do anything to protect her. During this time of being able to talk to Ayumi the god of death falls in love with her. Even when he gets jealous and starts to say how Ayumi would die soon anyway so why be with Musashi. He ends up learning that she belongs with Musashi and that he would do anything to save her from death and the consequences is quite high. . . 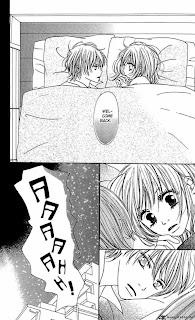 It's a cute simple style this mangka has. She loves her details simple and yet you know what your seeing. There is lots of talking in this manga but it doesn't take away from the images. It also shows lots of chibish parts but those are cute to see. As you can see the characters are drawn cute both in the design of the boys and the girls. They are a simple design but you will love the characters either way.

Overall
I highly recommend this manga, you will fall in love with the characters and especially the god of death. You might cry but that's what makes the ending so very good. Here is the link if you wish to read the manga:
http://www.mangareader.net/1258/as-the-death-god-dictates.html