The Great Influenza: The Story of the Deadliest Pandemic in History by John M. Barry 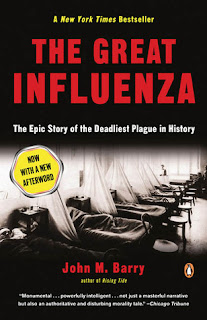 The Great Influenza: The Story of the
Deadliest Pandemic in History

Summary
At the height of WWI, history’s most lethal influenza virus erupted in an army camp in Kansas, moved east with American troops, then exploded, killing as many as 100 million people worldwide. It killed more people in twenty-four months than AIDS killed in twenty-four years, more in a year than the Black Death killed in a century. But this was not the Middle Ages, and 1918 marked the first collision of science and epidemic disease. Magisterial in its breadth of perspective and depth of research and now revised to reflect the growing danger of the avian flu, The Great Influenza is ultimately a tale of triumph amid tragedy, which provides us with a precise and sobering model as we confront the epidemics looming on our own horizon. John M. Barry has written a new afterword for this edition that brings us up to speed on the terrible threat of the avian flu and suggest ways in which we might head off another flu pandemic.

My Thoughts on the Book
I know this book is different then what is normally reviewed, but I thought that it was still very interesting and one to be shared. It is purely fact, talking about real events and statistics.

The Great Influenza talks about the scientific breakthroughs, and letdowns, before, during and after the 1918-1919 outbreak of the Great Influenza. It goes by other names, such as La Grippe and the Spanish Flu, and in this review I'll be calling it just influenza, as it is in the book.

John M. Barry does a fantastic job when presenting the story of the influenza. He discusses the scientific breakthroughs pre-1918, such as the rise of immunization, antibiotics, and even cures for contagious diseases. This sets the scene of why people didn't feel afraid at the start of the outbreak. As is said many times throughout the book, "It was only influenza. Only influenza." Barry also discusses the backgrounds and rise of many prominent scientists and doctors at this time, such as Henry Welch, Simon Flexner, Oswald T. Avery, and Paul A. Lewis. They, and others mentioned in the book, were the pioneers of medicine at the time. They were among the first to use microscopes and modern scientific methods, and fought to find a cure for the influenza, even at the risk of infection themselves.

Barry traces the outbreak of influenza, from the start of just a few soldiers coming down with illness, to the spread of the general population. As it was "only influenza. Only influenza," no one was worried about the influenza reaching the levels it did. The disease, in its various forms, usually killed the very young and very old, not men and women in the prime of their lives. But that's exactly what happened. Among the highest ranges of death was in the 24-29 year range. Instead of the usual U graph, it's a W graph. This is explained, as the discoveries happen.

The statistics in the book vary, but that's due to the often inaccurate reports at the time. The influenza carried between a 10%-20% death rate, with about 3-6% of the global adult population dying. In numbers, they range between 25 million within the first 25 weeks of infection, to as many as 40-100 million dead globally. Why does this matter? This happened nearly a century ago. Well, the strain of influenza was... H1N1. Yeah, that H1N1. The strain that appeared then appeared to have been a particularly lethal one, hitting in three waves in one year. The one that flared up in 2009 was a less lethal form, but had the potential to cause a new global pandemic. Even today, we're not prepared to be able to handle the sudden deaths of millions of people within weeks.

I can admit, this book hit close to home. Both my mother and grandmother were nurses, and it made me think of them while reading about the nurse shortage. About nurses who were kidnapped so they would treat sick patients, or those who fled their jobs for their own lives. And especially about the nurses and doctors who died trying to cure. My maternal great-grandfather's (through my grandfather) first wife was also killed by the influenza. If she had lived, would I be the woman I am today?

The one thing that bothered me about the book was that it was very American centered. It glossed over the war, making it seem as though the war only really started once America became involved. (Again, a personal connection, as my maternal great-grandfather was a soldier in WW1.) It also talked mainly about America's sickness, talking about other countries as barely more than statistics or minor breakthroughs foreign doctors made. This was a global pandemic, not just an American disease. On the other hand, photos of major scientists are included, as well as the photos of the field hospitals and precautions people took at the time.

Overall
If you're looking for a historical book, this is a highly recommended read. The science is easy to understood, as well as the timelines.


Rating5 out of 5 Howling Wolves

Review By: Cassandra Halikas
Posted by Unknown at 6:41 PM