Constellations in My Palm Manga Review! 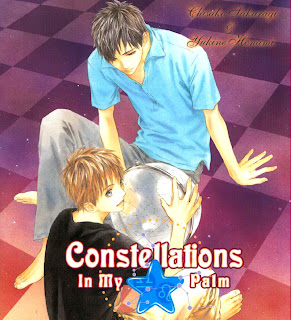 
Summary
Enji is moving on to college and it turns out he’ll be living with his cousin Mizuho, who he hasn’t seen in seven years. Enji, once the younger cousin that Mizuho thought of as a cute little brother, is now a tall, handsome man practically oozing with cool. And yet, despite how close they used to be, Enji’s giving him the cold shoulder. Has Enji simply grown out of being Mizuho’s surrogate younger brother, or is he trying to hide his true feelings?

My Thoughts on the Manga
This manga is just to cute and heart wrenching. The characters are so clueless about each other you feel frustrated that they can't see that they love each other. The each think the other person likes someone else. Quite a few times I felt like I needed to smack them to get them to see each other properly.

The story is from Mizuho point of view, you watch as he goes through the emotions on how to deal with Enji after not seeing him for so long. It's a silly reason as well for staying away from Enji for so many years, even if they were cousins Mizuho found ways to stay away from their families get together. It's the same thing with Enji he doesn't know how to express himself to Mizuho who he has loved for so long. He tells Mizuho quite a few times that he loves him but it never works. Mizuho never believes him and it just makes Enji more and more upset.

Because it's hard for them to understand each other and hard to express themselves the romance in this book is slow. You see how Mizuho struggles to know what his real feelings for Enji are and he doesn't realize it till near the ending of the book. Enji does advance on Mizuho a few times even tells him he loves him but that's about it. They don't show there feelings till near the ending.

The plot is great and cute, for both Mizuho and Enji to meet again after so long and to struggle to get to know each other again is hard. The plot focuses around them and you will grow very found of these two characters. 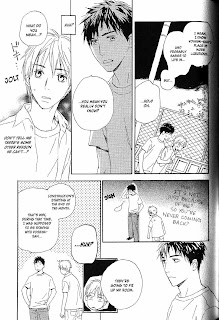 The style of this manga is quite simple for it's time but still very good. The design is wel done and even if there isn't very much detail in the background your real focus is the characters and there expressions. The light hair character is Mizuho and the dark hair is Enji.


Overall
Great story I loved reading this manga from beginning to end. If you like slow romance and a struggle for expressing true feelings then this manga is for you.