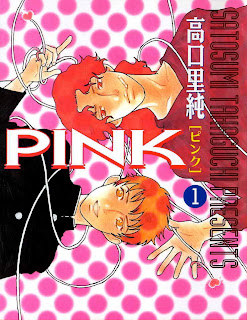 Now enter in Usagi's father, an attractive, sexy man who is more than a little interested in Benio, and makes no move to hide it both from Benio and his own son. And who could resist that? Who would want to?

My Thoughts on the Manga
I laughed and giggled and moved around so many times while reading this book.

To see how the character Benio takes in a highschool student to be his manga drawer is just to surprising. Since the manga he wants the student to draw has bondage and sex in it. Which he relizes later that the kid Usagi doesn't know anything about sex or bondage or anything sexual at all. Then stuff happens that will leave you blushing and giggling. Usagi the manga drawer starts to ask Benio about those types of things and asks him to show him how it's done. So the very first situation is where Benio ties Usagi up in bondage style to see how it would be drawn. This manga took so damn long for me to finish because of how much I was giggling the whole time. Except when the serious parts came then I finished the manga more fast during those times.

What confused me was not know who was with who. After first I thought the main couple was Benio and Usagi but then Usagi's father came into the picture and started to advance on Benio. Not only that but Benio accepted Usagi's father and slept with him even though he was starting to like Usagi. I get the feeling most of this would have been explained if the Mangaka thought to make the manga longer to explain who the couples were and who the side people were. Cause now I think Usagi is with another manga drawer and Benio is with Usagi's father. I still like the manga though even if it was confusing at times. 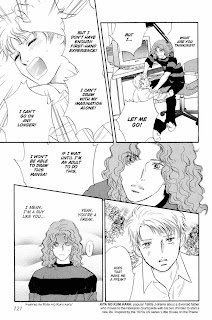 As you can see it's olden style drawings. The drawings isn't as detail or good looking as the manga coming out right now. It's simple but detailed in it's own way. Even if they were drawn this way I still liked everything about the manga. It drew me in fast with the funny plot line and the weird characters. This manga style also reminds me somewhat of the manga/anime "Hana Yori Dango" or better known as in english "Boys over Flowers".

Overall
Great story line, funny character interactions other then the confusing parts I did love this manga.