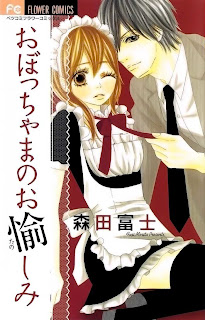 
Summary
“Young Master, please stop teasing me!”
“How am I supposed to do such a thing to you, Master?!”

After my Mom gets into an accident, I had to go in her stead to be a maid in the noble Takaido household. However, it’s not an ordinary maid job, I am assigned to serve a slightly perverted and saucy young master?!

My Thoughts on manga
Despite how the cover looks it was a really good manga with lots of scenes that makes you laugh and even if Obocchama(the master) is perverted you still end up liking him. Not only that but the drawings are well drawn for a shojo manga. Though this is a clique maid manga where the rich falls in love with the poor it is still good either way.

Ayumi Nakajima is our main character of this manga. She is a normal 19 year old girl who wants to help out her mom who is sick. So she goes to the Takaido house hold to be a maid instead of her mom. She couldn't help but fall in love with Obocchama even with his perverted ways. Obocchama is our male main cahracter he is the youngest of his siblings in the Takaido house hold. His father has big plans for him for taking over the family company/business. He falls in love with Ayumi who is different from all the rich people around him. Though trouble happens when his brother appears and his old tutor who both dislike Ayumi being with him but despite that he still loves Ayumi.

The romance is actually a bit fast due to it being 1 volume and the story it's self is only 3 chapters. Though there is some trouble with their relationship, for example how Obocchama has an arrange marriage to a rich girl. Then you have the brother who wants to take everything away from Obocchama that he cares about as well as the tutor who tried to break them up. Despite all of this both Ayumi and Obocchama prove their love for each other. 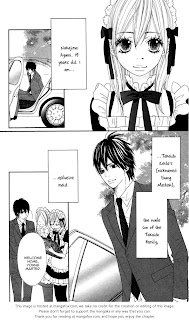 As I mention above this manga has good shojo drawings of both the guy and the girl. Though there is detail in the faces and hair, the outfit designs are kind of basic. Some minor details as well is that the backgrounds sometimes lack details but that is to make the characters stand out more.

Overall
If only this story was longer it probably would have been rated higher but still if you like perverted young guys who are cute then check this manga out if you find the time.