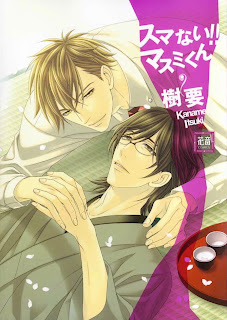 
Summary
Shiraishi Shoutarou, a novelist, just learnt that his young and honest editor-in-charge, Osanai Masumi, would marry his precious daughter. But his daughter went missing right before the wedding!
So now, Shoutarou is living under the same roof with the man who was supposed to be his son-in-law...

My Thoughts on the Manga
It's a really cute short story about these two characters. From beginning to the end of the manga I loved the whole manga.

Shiraishi is such a great father who cares so much for his daughter who he has taken care of by himself since his wife walked out on them. So when she comes to him saying how she is going to marry his editor Masumi it surprises him.  Then just as suddenly his daughter disappears on the wedding day and he decides to have Masumi live with him, that's when their relationship starts.

Masumi has been in love with Shirasishi for such a long time. He even became a editor to be close to Shiraishi. Luck would have it that Shiraishi's daughter asked him something big and in the end he endded up staying with Shirasishi. He doesn't know how to express himself and is kind of embaressed to do so. At first it was hard trying to hide his feelings from the older man but soon they both realized their feelings.

For a one shot the romance ran slow and smoothly. They were so cute in the build up to them both having the same feelings for one another. It wasn't long before they got together and even then it was really cute.

The plot was great and ran smoothly for it being only a one volume manga book. It sentered around Shiraishi and Masumi and their releationship growing from just editor and writer to lovers. Even the twist about Shiraishi's daughter was a big influence for Shiraishi and Masumi to get together. 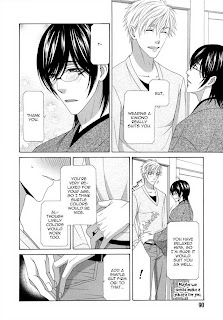 The design of the manga is simple, there is some detail in the hair face and background but not to much. The mangaka did put detail in the clothes though as you can tell and the hands. Masumi is the white hair guy and Shiraishi is the dark hair guy. As you can see you would have never though Shiraishi is older then he looks because it actually looks like he's really young while he has a daughter who is 21.

Overall
This was an alright story, It could have been better but I didn't mind it to much.