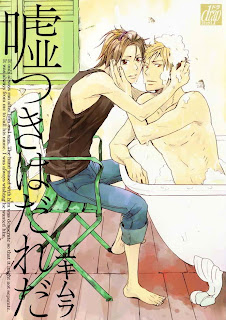 Ichita and Hiromu are childhood friends and neighbors. But when Hiromu sees Ichita making out with another guy, he calls it "disgusting" and stops speaking to Ichita. Does Ichita just want his friend back? Or does he want something more from Hiromu?

My Thoughts on the Manga
I will say this first, it's such a sad cute story about two friends, with a great background story between the two and a great story of how they got together.

Ichita has been depressed ever since Hiromu and him stop being friends. He's a cute guy who is afride of Hiromu thinking badly of him again. He learns that he loves Hiromu but could never tell him. He works as a hair dresser and his boss has only started to like him and has been trying to get Ichita to date him but Ichita only has eyes for his old friend Hiromu (though he doesn't know this at first). Hiromu has always notice Ichita though he doesn't know how to express himself till it was almost to late. He's possive and has always had feelings for Ichita but only recently did he realized what those feelings were. Things get worse for both Ichita and Hiromu but soon they do settle their feelings for one another.

Ichita and Hiromu use to be friends but a incident happens at school during their highschool years that made them grow apart. Soon though they start talking again due to the help of Ichita's grandpa and though it's aqward at first they still try. Things between the two get worse from a miss understanding and that's when Ichita starts to think about moving away with his boss who has feelings for him.

This manga's story really draws you into their old friendship and their new relationships. Not to mention you wish for more because the manga ends to short.