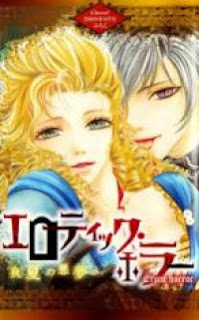 
Summary for 1 and 5
Five creepy oneshots by five different authors.
1/)Fallen Women - Fake World by Watanabe Shiho
Chieri is beautiful and popular and envied by everyone. Even her friend, the plain and shy Yuko. Then the email goes out, "You can now transfer your flaws and imperfections to Chieri Nanjou." It's not a joke, it's a curse...
5/)Transient Future by Shimaki Ako
Tsukamoto is stuck reliving the same day, and every day it ends with her boyfriend being killed by a mysterious stranger. Determined to save him, how far will she have to go?

My Thoughts on the Manga
Thankfully not every chapter was really bad. There was only Two out of the five stories that didn't end so bad.

Each story was tragic in its own way but there is so much death probably that's why it's called Erotic Horror. The only stories I like was the ones that ended good the other three were scary and the character either went crazy and died or they killed someone. It's a first time reading a manga like this so it diffently surprised me some but overall it was good. Every once in a while I would try to read something new and this was one of those times that maybe I shouldn't have tried to read it, cause a lot of the stories were depressing. so if you don't like depressing and morbid stories don't read this manga.

Each character was unique because it was writen by a different author which I thought was great. They had their own back story and none of the stories were the same. This was my first multie author manga book and they did a good job!