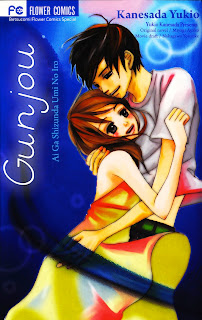 
Summary
Even though they played together innocently since they were young, somewhere along the way, the seeds of "love" started to grow. Growing up on an outlying island from Okinawa, Kazuya, Ryoko and Daisuke were brought up like a family. They wanted to be together forever, but the three of them have different desires. One wants to stay, one wants to go, and one of them wants to go, but can't. When Daisuke is lured away from the island, Ryoko decides to stay on the island with Kazuya. However, the three of them will experience a cruel fate...!

My thoughts on the Manga
I did enjoy this manga, it made me tear up a few times but it was lackig a few things. The author seemed to have rushed importent scenes, because i'm pretty sure if you have a psycotic break you won't suddenly become better after a day of having an old friend return. Not to mention that this manga took place first when they were in grade five, then to when they were in their last year of highschool and then finally when they were 20. It's just a fast moving manga, a bit to fast for my liking, it would have been tones of a lot better if the mangaka took her time and made this more then one volume.
This manga takes place mostly on an island where our three main characters live. At fist they all wanted to stay together forever but somethings happen and like the summery says one wants to leave the island, one wants to stay and one wants to leave but can't. You start to notice right away that both Kazuya and Daisuke love their friend Ryoko and neither one wants to lose to the other because they both want Ryoko. Things are fine until they reach highschool an that's when everything for the three friends change.
Ryoko is a great girl who loves her friends and her father but can't seem to stay what she truely wants in life. Her father keeps her at home not letting her leave the island to go to college. She loves Daisuke more but can't tell him because he's leaving the island. Kazuya is left on the island so she decides to be with him cause he's staying. If anything she gets on my nerves probably even more so if this manga was longer. Both Kazuya and Daisuke are great characters and so cute. They both care for Ryoko and deal with their issues on their own. If only Daisuke stayed a bit longer he could have been there for both Kazuya and Ryoko but he left and then two years later something happens and he gets back to late to help them.
Great story as I've said before if only it was longer and take the time to go into depth with each character I would have liked it more.
Design 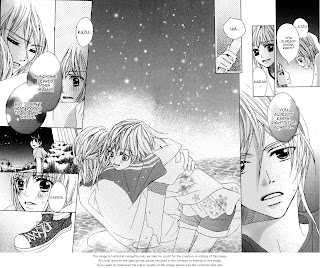 Yes this is the scene where Daisuke walks in on a moment between Kazuya and Ryoko. If he only stayed maybe things would have turned out differently between the three of them. Anyways this mangaka put a lot of detail into the characters and background work. Her style is cute and matches the way this story is. Lots of detal is put into the hair and eyes i've notice which captures your attention more.