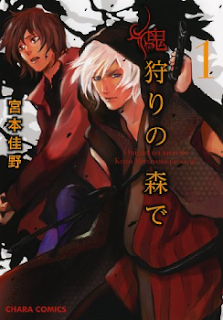 Summary
Misono Kazuki is a college student pursuing a dream of becoming a famous novelist—but unfortunately, for someone trying to pen a supernatural YA novel, he’s got next to no experience with close encounters of the spiritual kind. To remedy this, at the suggestion of a friend, he heads to a supposedly haunted shrine late one moonlit evening, and while he doesn’t find any ghosts, he does find something much more interesting.

My Thoughts on the Manga
Great manga so far, It's not done yet but the next chapters won't be out till February so I will talk about what is out so far.

This manga is interesting and new, our main character finds himself suddenly attacked by someone with white hair. He later learns that this white hair man is from another world that is full of demons and monsters and the white hair main is someone who kills those demons but also he kills the demons(humans) of Misono's world. They soon work together to try and find a way to stop the portal between worlds from spreading further. Because if it's not stop then more humans from Misono's world will be pulled into the white hair guys world and ultimately killed.

It's an interesting start to the manga and I do hope it doesn't end so soon, I think this manga could go on for a few volumes because of how the plot line is. I also do hope that the two guys I like end up together. Not to mention that the white hair guy is actually part demon which is interesting in itself. 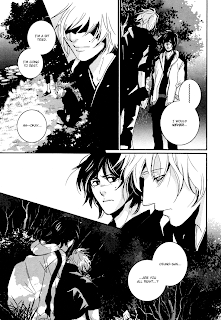 Since this manga was made in 2011 I do expect the drawings to be more updated in style and hey are. I love the way the characters look and you can sense their expression from just looking at the images. I really can't wait for the second book to fall in love even more with this mangaka drawing style.