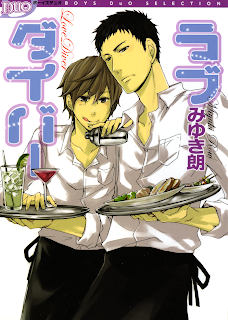 
Summary
A master chef and the owner of the bar where he is about to begin working at, is actually high-school classmates. In the past, they had shared a kiss, the scent of flowers still clings onto the owner's body... The master chef who thinks about the past, is carrying complex feeling everyday?
Also, the owner is someone with his pheromones on high, and super popular with other men that one night, he was attacked by an unknown stalker! Decadent wine and love stories between adults...

My Thoughts on the Manga
I did enjoy this manga but it could have a bit more story line to it. It was sad that it suddenly ended when it did. The romance was slow because it did take the characters a few years before they found each other again and fall in love.

The plot was interesting, the two main characters knew each other from highschool. The owner of the bar actually kissed the chef long ago and was punched in the face because of it. The the feelings of the chef has changed over time and he became attracted to the owner and after a stalking incident they fall in love. 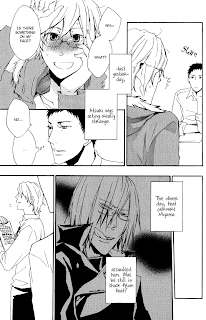 I was a bit disappointed with the drawing style of this manga. It would have been a lot better if the author wanted to put detail into the drawings. So unlike other manga's with poor drawings skills I couldn't stand it because the plot was a bit poor so I focused a lot more on the way it was drawn. The guy with white hair is the owner of the bar and the black hair guy is the chef.