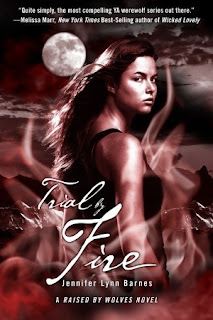 This is book two of the series.

Summary
There can only be one alpha.

Bryn is finally settling into her position as alpha of the Cedar Ridge Pack—or at least, her own version of what it means to be alpha when you’re a human leading a band of werewolves. Then she finds a teenage boy bleeding on her front porch. Before collapsing, he tells her his name is Lucas, he’s a Were, and Bryn’s protection is his only hope.

But Lucas isn’t part of Bryn’s pack, and she has no right to claim another alpha’s Were.  With threats—old and new—looming, and danger closing in from all sides, Bryn will have to accept what her guardian Callum knew all along. To be alpha, she will have to give in to her own animal instincts and become less human. And, she’s going to have to do it alone.

Bryn faces both the costs, and the rewards, of love and loyalty, in this thrilling sequel to Raised by Wolves.


My Thoughts on the Book

It has been a couple of years since I read the first book of this series, but as I was reading the beginning of this book, things from the first book came back to me. Not a lot of books do that to me, not unless I'm reading the books back-to-back. To me, that shows how memorable and enjoyable this series is. I loved every moment of this book, and it had twists that I did not see coming. The book was well written. It wasn’t too fast, but not too slow either. I found also that this is very much a Young Adult book and, everything that happens in this book is suitable for the genre age. The plot of this story still centers around Bryn like the first book, only its about her and her new pack.

This book centers around a human alpha name Bryn. Her pack is called Cider Ridge pack, which is located in the small town area called Cider Ridge. The area was given to her by her old alpha, Callum, for her pack. Her pack is mostly made up of female werewolves, which is something very rare in the wolf community. Her pack is always be target of other werewolf attacks, as other alphas want the females for their packs.

The plot picks up when a mysterious girl appears at the high school Bryn, Devon, Lake and Maddy attend. We learn later that this person is a psychic, and that she is the one most feared in her group. Then a wolf appears, badly hurt when he was stuck midway in his human to wolf transformation. They learn this wolf’s name is Lucas, and that he wants to stay with Bryn’s pack. It doesn’t take long before they realize that he isn’t telling the full truth, but they have to save him any way they can. They learn that the human psychics have powers that could hurt wolves. Bryn was scared for her pack to go up against the psychics, but she knew that they were working for Shay, and she couldn’t let Shay win to steal the females from her pack

Bryn is just getting use to her alpha responsibilities. Growing up in a werewolf pack helped, but she still has a lot to learn. She's able to learn quickly, and grows into a responsible alpha. Bryn is very protective of her pack, and in turn they protect her because she is human. She works hard at being an alpha, and to learn more about her power about being a resilient. An example of this power is when Bryn when she is backed into a corner and in danger. She began to see red and blanked out. When she came around, her enemies were on the ground and she couldn't remember what happened.

Devon is still as silly as ever, making quotes from plays and other media. He is about the same age as Bryn, and grew up with her in the pack, but unlike Bryn he is a werewolf. Is demeanor becomes serious when Shay, his brother and alpha of Snake Band pack, is mentioned. He doesn’t like his brother at all, and wants him dead. However, he can't bring himself to kill Shay. One reason is because he wants to stay with Bryn and protect her, and the second reason is because he is still too young to even try to defeat him. He is a really good guy, and I find it a good thing that he is with Bryn as her second.

Chase is just someone you adore and like right away. He is a werewolf and is a resilient like Bryn. He is always looking out for Bryn. No matter what, she will always come first for her. His dedication goes as far as even being willing to be separated from the pack and live as a lone wolf for her. However, he wants to stay with her. Chase and Bryn has a connection that no one else has, and it draws you into those two characters more.

Lake is one of the older werewolf’s of the pack. She’s one of Bryn’s closes friend, and the pack's weapon expert. She had to learn this skill, as she grew up being the only female werewolf in her childhood pack. Whenever anyone needs something to do with weapons, she’s the person to call.

Maddy is one of the females they had found in the last book. She is a resilient like Chase and Bryn. She was the one who kept telling Bryn that they had to save Lucas. She saw herself in Lucas because their lives were almost the same. She’s a good character and has strong convictions in wanting to save Lucas, no matter what.

We get to learn more of Ali and her past. She is a mother figure towards Bryn. We learn that she knows a lot about psychics, and she even goes with Bryn to help her learn about them. She tells Bryn that the psychics live in a group called a Coven. She told them that they usually have one leader, and the rest follows under her/him. The Coven they are up against are being controlled by an empath (someone who can sense emotions), and Bryn and her pack have to figure out how to get to the leader to save the Coven before more blood is spilled.

With the new characters and new situations, this book series just got more interesting. The bad guys aren’t the same, and that leaves you wondering what the author comes up with for the third book of the series.