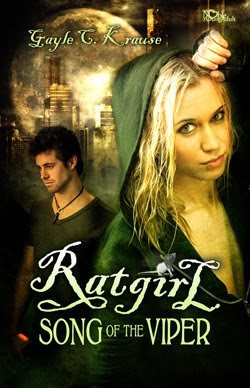 Summary
Sixteen-year-old streetwise orphan, Jax Stone is an expert at surviving in a dangerous city, where rats rival the homeless for food and shelter, but she’s an amateur at fighting the immoral mayor when he kidnaps her little brother. Desperation demands she quickly master the role of courageous opponent. She uses her hypnotic singing voice to lead rats to their death, and all the children to safety, in a dying city cursed by the deadly sun.

Review
“RATGIRL: Song of the Viper” is a unique title for a book, but the contents found within the novel - many will see why the name fits it. This book is a remake of an old fairy tale that takes setting in the future, but this ultimately only makes it more amazing.

This story revolves around the main character, Jax - a human female – that lives in a world over run by rats. She, along with other humans, live in the underground networks of the city and only travel at night to collect wares they find suited for trading. There is one character though that doesn't have this problem, and this would be the mayor of the city. The mayor is a dirty rich snob who will take anything he wants, and kill anything that may stand in his way. Jax, being the tough and spunky girl she is, stands up to the mayor and rats, all for the sake of her family that she has created in this corrupted world; that one detail helps me connect to the female protagonist, as I would do anything for the sake of my family. Jax is not alone in the fight as she has her friends Rafe and Colt, a boy that moved from Antarctica to her city for trading purposes, to stand by her side and fight those that wish to stop her.

There are a few components in this book that kinda turn the reader off sometimes. One component is the romance – it moved way too fast, but I let it slide as the book was partly romance based and more about adventure. There are some parts where she goes into costume and resulted with me just stopping to stare at the paragraph I read. A few things that bugged me were the lack of explanations given about certain situations. How did Jax and Rafe become friends? Why was Antarctica having times of summer, when it is a place that remains a winter wonderland? So many of these can be considered plot holes and tends to ruin the book if you linger on them.

Putting those to the side, the book still remained a good find and I do recommend this to anyone who loves dystopian books. It’s different and a cute remake of a child's story.

Gayle C. Krause is a member of SCBWI, YALITCHAT and The Cliffhouse YA Wonderwriters.She writes across the genres. Her first publication credit was a short story in Chicken Soup for the Kid’s Soul 2 (2006). The Storyteller’s Daughter, her YA historical short story, was featured in Timeless, A YA Historical Romance anthology from Pugalicious Press (2012).Her new YA novel, RATGIRL: Song of the Viper was published in February 2013 (Noble Young Adult).

During the course of her writing career Ms. Krause has served as assistant editor for Underneath the Juniper Tree, a dark fantasy online magazine developed for young teens, a children’s book reviewer for Children’s Literature .com and she offers a critique service for children’s writers at First Peek Critique. (www.gayleckrause.com)

a Rafflecopter giveaway
Posted by Unknown at 11:00 PM