The Promise Blog Tour and Giveaway 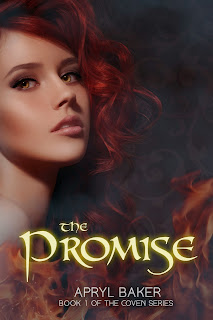 
Summary
Armed with kick-ass shoes, can CJ stop a maniacal coven leader, save the town, and still get Mr. Melt In Your Mouth Gorgeous while surviving the darkness coming for her?

The smoke from the fire burned her eyes, its heat caressed her skin and the taste of fear choked her. She was going to burn just as her ancestor did all those centuries ago in New Salem Village. How could she have been so wrong about everything?

Cassie Jayne Bishop grew up the only non-believer in town of Coven. When a stranger comes to the sleepy town of New Salem, everything she thought was true unraveled around her. Ethan made her question everything, even her sister’s death. Clues start to pile up and Cassie is determined to find out if the Coven was the real reason her sister died.

What she uncovers terrifies her to the very depths of her soul....