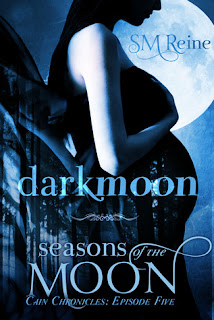 Summary
Rylie Gresham has survived becoming a werewolf, going crazy from silver poisoning, and being hunted by her fiance's family. But that was nothing compared to the challenge Rylie faces now: being pregnant...with twins. And it definitely doesn't help that her fiance's brother has declared himself the father, either.

The brothers, Seth and Abel, are at each other's throat over Rylie, even as the twins are fast approaching term. But it may be too late for all of them. The government has revealed the existence of werewolves, threatening everything that Rylie holds dear. And the evil werewolf Cain is preparing for his final act of revenge: destroying the pack and stealing Rylie's children.

Review
Where to begin with this awesome ending to the series. I just couldn’t stop reading it, and I loved every moment of this book. S.M. Reine knows how to make people love her werewolves. The ending was a total shocker, and I never saw it coming. At least it is a (sorta) happy ending.


The setting, of course, took place at the Gashham ranch, where it was a werewolf sanctuary for a while now.


The plot was amazing, and I’m glad the author decide to make this volume the longest one, instead of four parts. It made me enjoy the book all that much more. Rylie is becoming more pregnant by the day, and she’s only 19. Not only that, but the government has begun a crack down on demons, angels and Werewolves, no longer treating them like normal beings. Who, may you ask, is behind this? Well, none other then Cain, the half brother of Abel and Seth. If that’s not stressful enough for Rylie, there is the added bonus of having to make her final decision on who she wants to be with, because of course she can’t have both brothers. We also get to meet a few new characters who help Rylie and the pack. It left me guessing about who they really are, and wanting to learn more about them.


Rylie has grown over the time between 'The Cain Saga' and the 'Season of the Moon' series. She grown from a normal teenage girl, to a werewolf, to the 19-year-old Alpha of a pack, and now a soon to be mother. She is strong and brave, and in this book you kind of see a side to her which you haven’t seen since she was a human. That is her scared side. Scared of what’s going to happen when she gives birth. Although, any first time mom, especialy a young mom, would be scary for anyone. With her being pregnant, she can’t deal with normal pack stuff, like acting like an Alpha. The stress for her would be too much. She is told to let someone else handle the pack, and I don't blame her at all for being angry at the order. She finally picks a brother, which I'm glad about, but come on! She dragged those two along for almost the whole 'Cain Saga'. I wanted to slap her and tell her pick already, and stop leading them by the chain (dog joke for werewolves haha!).


Seth gave me one surprise after another. First, I find out he isn’t all what I pictured him to be. Second, how stupid can you get for thinking everything would be fine in your relationship, only coming home once in a while and only staying in the bedroom with your girlfriend. Third, you so had it coming with your brother wanting to snatch your girlfriend away. Besides all that, he is really a great character. He too has grown since I’ve read about him in the 'Season of the Moon' series. He has become a better hunter, and even found a new liking for the werewolves. He also has a kind heart, so when it was time for him to choose between Rylie being with him, or letting her make her own choices, he let her make her own choice. I was happy with which ever choice she made. All in all, a great guy, and hopefully he has a happy ending soon.


Abel is a great character and I’ve grown to like him a lot more in 'The Cain Saga' then in the 'Season of the Moon' series. He has more of a role in this series too, being a wolf and Alpha. Abel is tough when he needs to be, and despite being an Alpha, he tends to be alone most of the time. He is also a very nervous type of father. It was funny when I read how he freaked out, not knowing what to do when Rylie started having contractions, and he ran off wanting to get help right away. He got help, but it left him feeling bad about leaving Rylie. He was about to let her go, which pissed me off. If I could, I would tell him to fight for her and forget about your mistakes, because they’re nothing if you love her enough. I almost freaked out at the end, when I thought the worst. I’m glad Rylie was there for him.


Levi caught my attention a while back when (SPOILER!!), I found out he was gay. I had always thought of him as a kind, quiet werewolf. He's proved that he’s far from it. All throughout 'The Cain Saga', he has been after Rylie’s pack, wanting to own it. I can see why, when the one person he loved had to leave because he had to care for another werewolf who was in trouble. That was no reason to treat so many pack members badly though. He tries to get back together with Tate, after finally meeting him after all this time. I was all for Levi and Tate getting back together, though I hated how dimwitted Tate turn out to be. Tate ended up going something bad, that effected the entire pack, and he thought that everything would turn out fine. I hope that Levi can have his own short story, maybe his own spin-off series. (Hint, hint).
Rating
5 out of 5 Howling Wolves