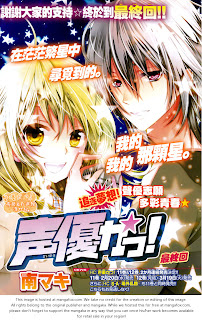 Summary
Kino Hime is a 15 year-old girl who just started her first year in a high school for voice actors (Seiyuu) called Hiiragi Academy. She dreams of becoming the voice of the main character in one of the most popular series in Japan, "Magic Fighter Lovely Blazers". The academy is the number one school which allows students to make their voice acting debuts and also includes other departments such as general education, sports, music, acting, and art.

Of course this Academy is full of celebrities, too. Two of Hime's upperclassmen are none other than the two rising idols of the group "Idol Unit AQUA".

But Hime's dream is hard to fulfill. Her voice is not really suitable for a voice actress and her new classmate Kudou Senri doesn't waste time in pointing that out. Will Hime prove everybody, especially Senri, what she is capable of despite the first appearance?

Review
The ending is not what I expected from this series, it was to fast. It left to many questions left unanswered and to many plotlines unfinished. Besides the disappointing ending this story was just so good. I loved every moment of it.

Yes the story centers around a girl who is in school for voice acting. Only problem is when she tries hard her voice comes out very bad. I wonder how she would have been able to become a voice actor in the first place with out the help of a boy who is in a singer group. Even then she can only make male voices, now if you ask me if she ever was able to make female voices I don't know. The mangaka probably got bored with this manga and decided to let everyone guess how she made her dreams come true, because being a female voice actor and a male voice actor is two different things. I would have perferd if the mangaka had continue this manga but sadly she didn't.

Kino is a cute girl and tries hard even though her mother hates her. Her reason for the hate is so small i believe the author didn't want to put detail into it, since we find out the reason in the very LAST chapter. Besides that Kino is strong and even with her crush on Kudou Senri and hiding it from him as well as the fact that she disguise herself as a boy for most of the manga. Each character Kino meets she helps in some way like Kudou showing him that it's okay for him to make friends. I believe if he hadn't met Kino he would still believe he has no soul and he's just a empty shell. 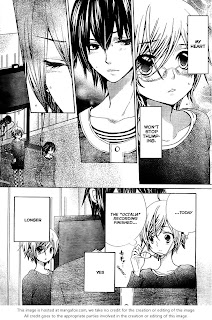 So much detail put in all the characters, at first I didn't like the design of Kino but she grew on me over time. Each character is different and you can see their expressions so well in the way the mangaka drew them. Also the background detail is good in this manga as well. The art work is great and I do recommend reading this series even if the manga didn't end on a good type of ending.

The white hair boy in this panel is actually Kino in disguise. You will find out why if you read this manga. The black hair boy is Kudou.

.5
It would have been a better rating if the mangaka didn't leave so many things unanswered.