For the Love of Hades Book Tour and Review 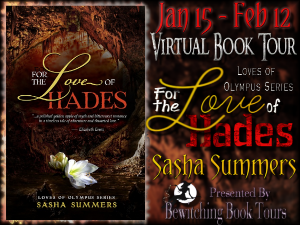 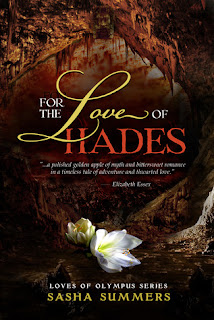 For the Love of Hades
(Loves of Olympus #2)
Author: Sasha Summers

Summary
Hades, God of Death, has no heart. Persephone is determined to prove otherwise…

Hades, the Lord of the Underworld, has no patience for living things or his Olympian brethren. His purpose is order, administering justice to those who enter his realm, and keeping the balance decreed by the Fates. Meeting Persephone sways his focus, her gentle sweetness threatening his control. But he will not be tempted.

Poseidon’s scheming wreaks havoc upon Persephone. Hades has no choice – he must rescue her.

Hades awakens something within the Goddess Persephone. She feels no fear from his brooding presence. In truth, she’s never felt so alive. Every stolen moment together only confirms her instinct: he is meant to be hers. Such a powerful union suit will face opposition – from Olympus, her troubled betrothed, the Fates, even Hades himself – but she is determined to win his heart.

Excerpt
For the Love of Hades

Hades glanced at the lily propped atop the mantle. The blossom was bright white against the black silk to which it was pinned, light against the darkness. He reached up, tracing one petal with an unsteady finger. He saw the tremor, cursed it, and clenched his hand, drawing back from the flower as if it had burned him.
Turning abruptly from the fire, he made his way to his chair and sat heavily. There was a sweetness to his burden, but it was no less a burden.
He leaned forward, rested his elbows on his knees and covered his face with his hands.
What had he done? How could he make amends now that his heinous act had been hidden so long? Using his powers to aid a mortal would seem trivial in comparison with the offense he’d committed against Demeter. Against Olympus.
And yet, he felt whole.
The raw emptiness that he’d held at bay, for nigh on an eternity, no longer threatened to consume him. Having her here, with her constant laughter and endless conversation, had changed his world irrevocably.
If not for her, he would have remained bitter and angry. He would not have interfered at Cyprus. He would never have thought to champion the mortal, Ariston…
“My lord.” Her soft voice interrupted his thoughts.
He lifted his head from his hands, surprised.
Persephone stood, beauty to behold, watching him with wide green eyes. In the blazing firelight her hair glowed copper, warm and rich. Her face, normally alight with smiles and laughter, was drawn. Was she not fully recovered? Or did the tension between them tire her as well?
His voice revealed nothing. “Persephone.”
Her steps were cautious, but she made her way to him. “Aphrodite?”
So she had seen Aphrodite. “Has gone.” And she should have gone with her fellow Olympian. He should have insisted she do so. He swallowed against the lump in his throat, ignoring the tightening in his chest.
“I thought as much.” She stood so close he could see the front of her tunic. The fabric trembled, thundering in time with the rapid beat of her heart.
Was she disappointed? Was she ready to leave him… his realm?
She should go. She should have gone weeks ago. He knew it was right. Yet knowing it did nothing to soothe his agitation. He clutched the arms of his throne, clinging to control.
“I’ve not asked you for anything in my time here.” She paused. “Have I?”
He shook his head once. No, she’d seemed happy, though he had little knowledge of true happiness, he supposed. His gaze found shadows beneath her eyes and a tightness about her mouth. He was a blind fool.
Have you been miserable? He could not ask the words aloud, fearing her answer.
Her voice was no steadier than her pulse. “Nor would I trouble you now, if my need were not so great.”
“What is it?” he asked. His voice sounded harsh to his own ears.
She sank to her knees, glancing at him with an almost timid gaze. Her hands lifted, wavered, and covered his hands. He stiffened, stunned by her actions. She touched him… He swallowed. The feel of her hands upon him squeezed the air from his lungs.
“Show me mercy. Show me the same mercy you’ve bestowed upon the mortal… the soldier Ariston.” Her hands clasped his tightly.
He would not reach for her, he could not. No matter how he might want to.
“Have I been cruel, that you feel the need to beg for anything from me?” His words were a harsh whisper. She shook her head and he continued, “Then why do you kneel before me?”
“It is a selfish request, one that may turn you from solicitous to,” she paused, her cheeks growing red, “… sickened.”
Was it possible for him to feel so towards her?
He stared at her hands, wrapped about his. He would not meet her gaze. He would not reveal his damnable weakness to her. He could not risk losing himself in the fathomless depths of her green eyes. “Ask me,” he murmured as his traitorous eyes sought hers.
She drew in a wavering breath, ragged and labored. Her whispered words were thick.
“My lover… Release him. Release the man who loves me, please.” Her eyes sparkled, mesmerizing him while his heart, so newly discovered, seemed to shudder to a stop once more.

She's been writing ever since. She loves getting lost in the worlds and characters she creates; even if she frequently forgets to run the dishwasher or wash socks when she's doing so. Luckily, her four brilliant children and hero-inspiring hubby are super understanding and supportive.