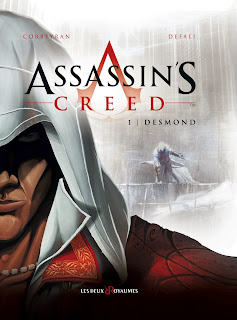 Summary
Why is Desmond Miles being held prisoner under high-security at mysterious experimental laboratory?

What incredible secret buried deep within his DNA and concealed by his genetic memory?

Why are they delving into the past lives of Desmond's ancestors, all of whom belong to a sect of Assassins?

Don't they know it's dangerous to reawaken the memory of an Assassin?

The characters from the hit videogame, Assassin's Creed (which has now sold more then 8 million copies) come to life under the penmanship of celebrated writer Cobeyran and Artist Djillali Defali who take us on an exciting adventure which defies time and science as we know it, a completely new story which will shock and surprise readers and videogame fans alike! 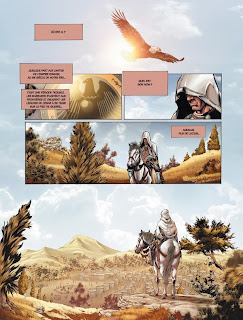 Movies and books have always had a small difference between them and games are no exception. Plenty of people have played the game, but when the game “Assassins Creed” entered comic book form, many were able to see the differences added. While being short in story line, one that was easy to follow, it was made up very much by the new details added and the artistic effort put into it.

This story answered questions on how Desmond was first captured, as well as introducing characters that were never revealed in its game counterpart; one character being from Desmond's genetic pool. At one point there is even a new character shown to have once been part of the Templar’s experiments, an experiment that attempted to gain access to past lives of another assassin's genetic line.

Now what really catches the reader's attention will be the artwork. They paid nothing less but the best to make the artwork look like it was from the game. Everything is very detailed, which only adds more to the rating, and with all this combined, I can only say that this was 100% excellent.

This is a must read for any gamer and for all AC fans out there.


Review
5 out of 5 Howling Wovles