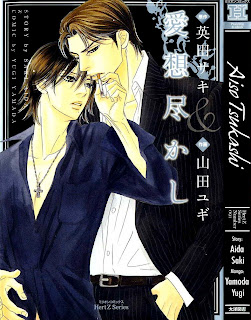 
Summary
Here we get to follow a story about Sawaragi from Takaga Koi daro.

Continues the story of Sawaragi-san after his jail time.

Having been sentenced to 5 years in prison for dealing drugs, yakuza Kyousuke Sawaragi just wants to finish his sentence and start a nice normal life far away from his past. So after parole, when he literally runs into former cellmate Shuuya, he's in no hurry to renew their acquaintance. Fate seems to have other ideas though, having the yakuza and Shuuya repeatedly cross paths with him. Can he really turn his back on all of it, especially if it holds out his one chance at finding true love? It's exciting romance as only the famed Saki Aida (S) can write it and Yugi Yamada (Close the Last Door) can draw it!

My Thoughts on the Manga
This was a great follow up to Takaga Koi daro. I can't choose which story I like most because I like them both so damn much.

In jail Sawaragi is different from how you know him in the provous book. He doesn't want to have anything to do with the Yakaza any more and wants to start over. Not only that but he doesn't want to help Shuuya at first until he couldn't take it anymore and he finally saves Shuuya from a prick. When they get out of jail and Sawaragi meets Shuuya again he takes him in right away. All Shuuya knows all his life is sex, he only knows how to sell his body. He doesn't know how to express himself through any other way but as he starts to stay with Sawaragi that slowly starts to change. He wants to be good for Sawaragi and even goes away with a Yakaza at one point so that Sawaragi doesn't get hurt. He also does get jealous really fast and at one point he gets jealous over a small boy.

The first start the story where you see a black hair boy collapsed in front of Sawaragi but you know right away that Sawaragi knows him. Then they do a flash back to when he was in jail, the first panel you know exactly who Sawargi ran into in the preasent. In jail it goes through how Sawargi takes care of the kid without letting him get to close. The story goes back to the present and continues to show how Sawaragi and Shuuya interact towards one another. He still doesn't get close to Shuuya till he knows for sure that Shuuya will want more of him then just sex. 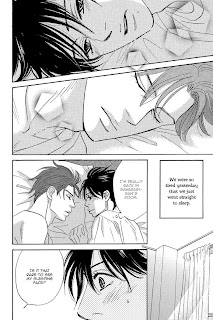 Again like the previous book this has lots of detail in how the characters are design and how the background of each pannel is design. Sawaragi is the guy with light gray hair while the boy is Shuuya. The expressions that the characters show is so nice and even when the author put detail in the background you fall in love with the style even more.


Overall
Great sequal to the series and I'm glad that it shows the characters from the last book. This really made me happy to see a sequel and I highly recommend this series.