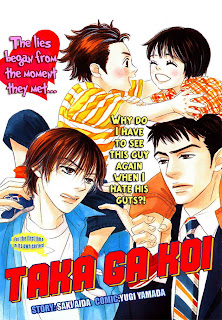 
Summary
Kurata Izumi's memories of Takatsudo Shin end at middle school graduation when Shin told Izumi he never wants to see him again. Now Izumi is a single father whose son is in love with Shin's nephew. They're forced to interact, but Shin doesn't seem to remember what he said to Izumi. Add Izumi's yakuza brother-in-law Sawaragi into the mix...

My Thoughts on the Manga
This was a very cute manga, it was both funny and sad. For a one shot manga it had a great plot line.

It centers around Izumi and how he is a single parent because of how his wife died giving birth to their son. With the help of his brother in law Sawaragi he got a good job as a cafe manager. During this time he runs into his old friend Shin who he hasn't seen since middle school graduation. The reason was because of how Shin told Izumi how he never wanted to see him again. So seeing Shin kind of scared Izumi and not be able to trust him all that fast. Shin has loved Izumi all those years but only recently with him running into Izumi again did he realized that. He works as a cop undercover to get close to Izumi at first but then his feelings for Izumi took over and he just wanted to be near him.

I do love the romance in this book, it's slow but you do see chemistry between the two main characters. You can tell how Shin wants to apologize to the way he acted all those years ago. Eventually Izumi accepted the apology and got together with Shin.


The plot is great, you see how Shin goes under cover to uncover a drug dealing that is going on with the Yukaza, which is coming from Izumi's brother in law Sawaragi. Somehow Izumi is apart of this but he has no idea and Shin realizes this. While this goes on you see that Izumi does a great job as a parent and works hard to provide for them both and Sawaragi helps as well despite him being a Yakaza.
Design 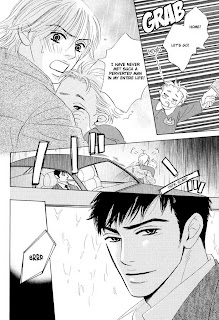 The light hair guy is Izumi the main character of the book and the black hair guy is Shin the side character who is the cop. I've seen this style of art before and it's really well done. It has some great detail in the panels especially on the characters themselves.


Overall
Great story line and the characters are just so loveable. Especially the little kids, you will laugh at how one treats the main character. You will be glad to know there is a sequel with Sawaragi the Yakaza brother in Law.