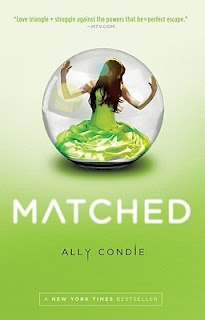 Summary
Cassia has always trusted the Society to make the right choices for her: what to read, what to watch, what to believe. So when Xander's face appears on-screen at her Matching ceremony, Cassia knows he is her ideal mate . . . until she sees Ky Markham's face flash for an instant before the screen fades to black. The Society tells her it's a glitch, a rare malfunction, and that she should focus on the happy life she's destined to lead with Xander. But Cassia can't stop thinking about Ky, and as they slowly fall in love, Cassia begins to doubt the Society's infallibility and is faced with an impossible choice: between Xander and Ky, between the only life she's known and a path that no one else has dared to follow.

My thoughts about the Book

This is a really slow moving book, made even worse that the author wrote like the people will know everything right away. It took me till the middle of the book to know why they took pills, when they were mentioned at the beginning of the book. There are two other groups, the anomaly and Aberration, and it took me a while to figure out one of them. The other, I still don't get. Besides these three facts, I did come to enjoy this book. It took time to get into it, but once I did I couldn’t put the book down.
Our main character is a girl name Cassia. All her life she has been looking forward to her matching ceremony. This is when the officials pick the right man or women for you. She always followed the rules of the officials, as does everyone else does. Once your match is chosen you receive a microchip that shows you information on the person your matched with. Her story begins with the realization that could be matched with two people, both of whom she knows. She learns that nothing in her society is what it seems. Everyone grows up listening to the rules, but how they grow up isn’t how they should live. With Ky she slowly starts to break the rules of the Society, without their knowledge.
Ky is one of the men that was matched up with Cassia. Ky is a Anuation, he was taken to his new parents when he lost his own ones when he was younger. He has lived in the society under the officials watch ever since. He acts like he doesn’t know what he’s doing, but he does. He keeps how smart he is a secret, because he doesn’t want them to know how smart he is for a Aberration (not sure how to describe this).
Xander is a good friend and was also chosen to be Cassia’s match. He has known Cassia since they were young and he loves her very much. He would do anything for the people he loves, even if it means going against the rules.  It broke his heart when Cassia told him that she loves Ky as well, but he still wanted to help her somehow and he does near the end of the book.

There is very small romance in the book between Cassia and Xander. The reason for this is because they are always watched and have to act accordingly. They can’t really go on dates alone, but they do kiss and hold hands at timest. Now with Cassia and Ky it’s a different story. They don’t do much, but they do talk a lot and share stories and secrets. You slowly began to see how Cassia starts to fall in love with Ky and it’s the same with Ky. Then over time they get closer and start to touch hands and at one point they even kiss on the lips. I just fell in love with this couple right away.

The plot centers around Cassia going from her matching to her reading a microchip that is suppose to be about Xander but somehow Ky’s picture also appeared.  Then the society officials come to talk to Cassia telling her it was all a mistake but Ky still doesn’t leave her mind. It’s not long before she starts to talk to Ky and tells him her secrets she kept, for example the two poems that her grandfather gave her. Which is against the rules because those poems aren’t one of the register 100 poems that were kept around. What this means is basically the society thought the information that was around was to much so it began to narrow down everything. There is only supposed to be allowed 100 poems, 100 songs, 100 paints and etc. Everything else is destroyed and not allowed to be known. The society got rid of all pens and pencils so that people aren’t allowed to write or draw anything. Though they do know how to read and write, but all on a tablet they carry around.  Ky and Cassia keeps the poems to themselves as Ky tells her his story and life.  Another thing about this dystopian world is that the society chooses what you have to eat and how you take care of your body. It has a curfew that everyone has to follow, and, of course, they choose who you are to spend your life with. If you're not matched, you are forced to stay single for the rest of your life. There are the three pills, the green one is to relax or makes you calm down when your worrying to much. The blue pill is to act as a food substitute if you don’t have food for a few days and the red pill is unknown to all of the town.  You don’t know what the red pill does till near the ending of the book.

The design of the novel was so great, I love the bright green cover and how the inside page is a different texture then the rest of the book. When you see the other covers you will understand me more but each cover is a different color pill. Having the bubble in the middle with a girl inside is really eye catching. Everything about the cover connects to novel in some way. From the bright green dress to how the book is named Matched. The white title is well placed under the main image and the small authors name is well done and doesn’t distract you from the title or image.


Overall
It’s a very interesting Dystopian novel though I did find it slow at times.