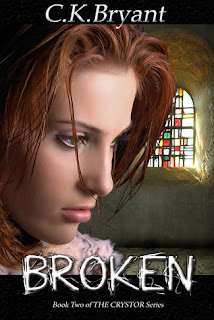 Summary
With Kira injured and dying, Octavion's last hope is to plead with the king of Panthera for a cure. But King Ramla's magic isn't free. The price he asks Octavion to pay goes against everything he's fought so hard to protect and could destroy his bond with Kira. Will Octavion trade his crown and swear allegiance to a kingdom feared by all, or will he sacrifice the woman he loves to remain faithful to his father and Xantara? Find out when BROKEN takes you on a journey into the savage and unpredictable world of Ophira.

My Thoughts on the Book
This Sequel to “The Crystor Series” was packed with everything I like in a book. It takes place on Ophira, Octavion's home planet. It had romance, action scenes, and plot twists. I found it better then the first book. Things also heat up between Kira and Octavion, adding to the drama.

I found that Kira was more emotional then in the last book. After coming back from close to death she learns she’s not on earth any more, Altaria is still inside of her and she doesn't know how to get her to leave. The commoners and royalty are treating her like royalty, as everyone believes that Octavion will choose her as his princess. She loves Octavion more then anything, but everything is just so new to her. Something unexpected happens in a fight that leaves Kira feeling more depressed, but Octavion cousin’s family help her through it. It's clear how much she really does love him, but she feels very insecure.

Kira also meets a few new people in the kingdom who become her friends. The main two are Cole (Octavion's cousin and Luka's brother) and Ussay. Ussay is a childhood friend of Octavion, but she must act like a servant at all times. When Kira tells her to act normally with them, she kinds it hard to do so. Kira and her do become close friends, and Ussay helped Kira when the new moon phase appeared and all the normal people who weren’t royals had to go into hiding.

You learn more about Octavion's history in this book, and he shows his feelings towards Kira more. Kira learns about what really happens to him, and his connection with the two moons of Ophira. Octavion really stepped up his role of prince when he returned to Ophira. In the previous book you do know he’s prince, but it's not seriously grasped until he is back in his country. Kira does become angry with him with some princely things he does, such as not paying the people when the royals want something. Kira is able to make him pay for what he essentially stole. This isn't the only example of her influence over him, showing that he loves her enough to listen to her.

The romance between Kira and Octavion is slower in the book, but more fleshed out. Th events that they go through bring them closer, and less of a whirlwind romance. Though there was also a lot more drama in this book concerning them being together. Kira does become depressed, and a potential love rival is mentioned. It will be interesting to see if this rival is used more in a future book, or if she was just an extra to make a reader feel more sympathetic towards Kira.

Same cover designer by the looks of it. I still don't like the Title font they use. I don't believe it has anything to do with the style this book is, the choppy look just doesn't fit the overall image. The background image though I do like, it shows off Kira's red hair and even the green eyes. It even shows a olden time house like structure making me think of how Ophira houses or castle may look inside.

Overall
Great Sequel make sure to check out my first review of Bound, this series is good so far make sure you check it out.

Rating4 out of 5 Howling Wolves