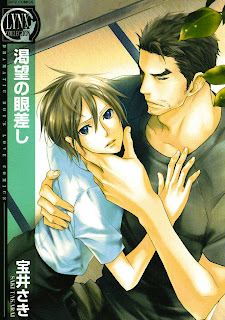 
Summary
After his mother deserted them, senior high school student, Reo was living together with his mother's stern ex-lover, the very imposing uncle Shuuji. But 2 months ago, as he dropped by his home on his way with a friend one evening, an event occurred that changed their relationship forever.
Since the day his uncle forcibly embraced him, the man demands his body time and again and Reo who has been suffering ever since seeks his close friend Kenta’s advice but…

Contains another short story: Pretty After ~ After

My Thoughts on the Manga
At first I was a bit mad at the manga because of how the characters acted. Soon though when the real story was told I began to like it more and more. It's cute story but has some dissappointments with the characters.

Reo is a good kid and he never thought his uncle/step dad to treat him like the way he did. He could only keep it to himself until he learn that his friend Kenta found out. He tried to run away and listen to Kenta only to learn his friend isn't what he seems to be. Then he learned the real truth to why his uncle treats him the way he does and he starts to see him in a different way.

I would have never guessed the Reo's uncle would be such a kind guy. He may look scary but he isn't he cares a lot about Reo for what happen years ago in the past. He was saved by the boy and maybe his reactions to him were in the wrong but he loves the boy so much. He even took the blame for what happen the night Reo seduced him. He was only trying to help the boy and he even ended up falling for him. 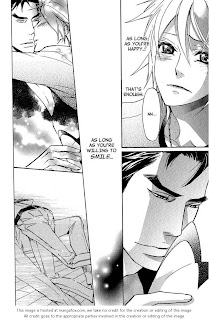 Cute expressions coming from Reo a lot in this manga. Reo is the light hair kid and the uncle would be the older men. Simple hair styling but the expressions were really well done. There was detail in the background but not a whole lot the author liked to make designs for the backgrounds quite a bit.