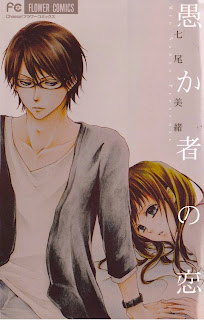 My Thoughts on the Manga
Besides the weird Summary this book is really good. Though I did have a problem with the fast romance but that usually what happens in a manga where it only has one volume.

Sakura is our male Main character, he's the black hair boy below. He's the one who Nozomi starts liking after she saw him without his glasses. Right away she feels attracted to him and was so embaressed that she ran away from Sakura after giving back his glasses. When she failed her test her mother asked Sakura to help her study and of course Sakura says yes. So it makes Nozomi even more embaressed because what highschool girl will feel calm while studying in front of her crush. Soon she realizes that there is more to Sakura then just his nice attutude. Dispite that she still loves him and tries to make him see her as someone to love. One problem she's in highschool and he's a university student, a five years difference between them.

Nozomi is like any highschool girl who tries to make the person they love for them. She is shy and gets embaressed easily but does her best. She even helps him out by watching his brother while he's out. She even saves Sakura's brother from falling and ends up falling herself but that brings them closer together.

Sakura isn't all who you seem to think he's like. He's mean and insensitive and doesn't care if she starts to cry. When the glasses are off he becomes more sexual, which is amusing to watch Nozomi run off since she doesn't know how to handle him. 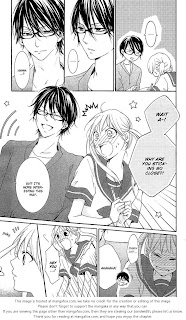 This drawing is what you expect to see in recent drawings of shojo manga. Lots of detail in the hair and clothes, sometimes even the background there is effort in scenes too. The expressions are really eye catching and you know right away what the characters are feeling. Believe me when I saw the guy is very good looking without his glasses on.