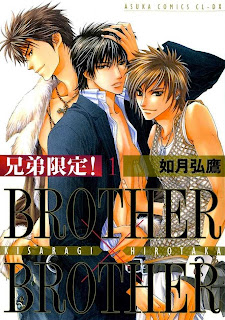 
Summary
After being told that his dad passed away, Souichirou came back to the house which was his home 8 years ago, and there he found out about the existence of his 2 older brothers, the eldest - Masato and the younger - Kaname. In order to receive rights to the house, Souichirou has to live together with them, and despite the chaos and arguments, it's fine by Souichirou if it means he can get the house. But one day, he accidentally sees Masato kissing Kaname...

Review
I actually been waiting more then 2 years for this manga to finish. That's how long i'ved liked this manga and been a fan of it. It's a great story and great characters, there is nothing i dislike about this book.

Souichirou is such a sweet character he loves acting and soon learns to love his new brothers(they all have no blood relation to each other). You wouldn't expect him to grow attach to them but he does and he even falls for Kaname the one who has a bad past. He doesn't even care about the house who is suppose to go to one of them, he just wants to focus on Kaname and his acting career.

Kaname had a bad past that left him with PTSD(post-traumatic-stress disorder). Before Souichirou came he always turned to Masato to help him. Even though it was bad for both of them they continued until Souichirou catches the two of them. Later Kaname is taken over by his PSTD Souichirou doesn't sleep with him like Masato instead he hugs Kaname and that's the start of their releationship.

Ever since Masato first met Kaname he's been using him. He cares for Kaname but can never love him because he loves Karou his and Kaname's step father, who died a little while ago. He could never tell Karou his true feelings and so he becomes accomplices with Kaname. Kaname uses him to get over his PTSD and Masato uses him to cure his desieres for their dead father. This was the same until Souichirou comes and changes everything for them.

It doesn't take long for Souichirou to fall for Kaname. Even with Kaname's bad past they both find a way around it. They're relationship is slow and it takes a while before they can finally be together but they find a way. Masato never loved Kaname even though they slept together and Masato is fine with Souichirou taking Kaname because he knows that Kaname will be safe and cured of his PTSD(post-traumatic-stress disorder). 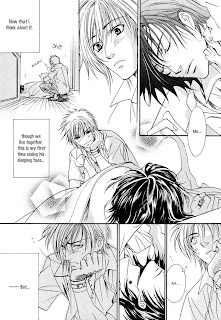 I just love this mangaka's style of drawing. There is so much detail in the facial expressions, hair and background at times too. She puts a lot of work into her characters and I know what the characters are feeling right away by their detailed expressions. The boy with the light hair is Souichirou and the boy sleeping is Kaname. Cute characters with cute story everything fits so well. I highly recommend this series and I'm sure you will like it.