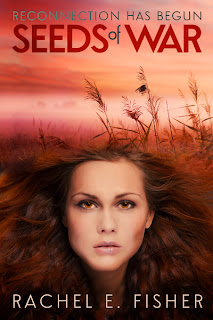 Summary
Seeds of War is the second book in the Eden's root trilogy.

The mission of Eden must be fulfilled and Eden’s best Seekers are needed. Forming a new group they dub the Seeders, Fi, Asher, and Sean are joined by a new addition as they set out to bring hope and support to the Topsiders in the form of radios and heirloom seeds. Their experiences Topside prepare them for the threat from marauding gangs they call Lobos, but it is a different, less obvious sort of threat that takes them by surprise. As radio broadcasts begin to reconnect Eden and the Topsiders, the Seeders stumble upon mysterious broadcasts from unknown stations. When two of their own new radio stations go silent within days of each other, Fi and her companions realize that something is terribly wrong. Eden finds itself pitted against a growing and unknown force as their very mission lights the flames of war.

Review
Got to say I really did love Seeds of war. This dystopian book didn’t disappoint, I was always left guessing with what’s going to happen next. When I thought I knew what was coming it turned out a surprise when I was wrong.

The setting for this book to place mostly in either eden or outside where our main characters travel too. It surprises me by how much backpacking they do with the distances they travel. They go so far to stay away for weeks and weeks for their job, sleeping outside under the stars. They love their job and look forward to doing it, you have to be fit to pull off that long of a trip. Though I can understand why they like it, being coupped up inside a place inside a mountain for long periods of time would feel quite boring.

The plot was fine, It was interesting to see how Fi new life inside Eden turned out inside of Eden.(all during the first book Fi and her family was trying to get to Eden to be safe, from the world outside) Not to mention we get to learn more about the reasons why the famine happen. (yes they do explain it) Fi was pissed at the reason for the famine, I would have been pissed too and probably want to kill the guy but Fi after having time to herself realized that the scientist who did this, never wanted to cause the Famine but it did, so the one person who was apart of that group, told Fi and she forgave him and told him to tell his story. Oh! we also see a new group of bad guys. The bad guys are called Truthers, Well not really bad guys and of course they don’t see themselves as bad guys. I’m sorry but if you burn down crops and electronics’ that people need to contact one another you are bad guys in my eyes. They believe that everything eden is trying to do(which is helping people) is evil.

Fi is our main character who in the last book found Eden. She stayed relatively the same person, only time she changed is near the ending of the book but that’s logical because of what new development she found out about. She now works for them going on seeking missions. Seeking is something where they go out into the world and gather materials from abandon stores or abandon houses. Because her group (Asher, Sean and Sean’s girlfriend Sara) has been doing so well the higher ups wants to do something for the families who are living outside in the world. This is where Fi gets back her role as being a leader of a group. She does a great job at being a leader, she knows how to lead and this is the role that makes her shine as a person. Though good drama does happen in this book from the wedding between her an Asher, which was really cute and sweet. To something I couldn’t believe Fi and Asher wouldn’t make sure not to happen. I won’t say what but I find it stupid that when she finds out about this thing she doesn’t go home right away. Hearing how Fi could agree with what the preacher man was saying (he has a name but this fits him more). She knows that Eden is doing it’s best with helping people so I can’t see how she could believe this percher man lies. Then suddenly she see’s him a devil for his words. I don’t get her and her switching sides all the time. It makes me doubt her abilty to be someone people can trust.

Asher is a great guy and a great boyfriend/finance/husband. He is a good trainer of the seekers, training them how to protect themselves and fight. Which I find pretty cool, anyone who can fight and use a sword is hot in my eyes. He is actually the one to plan the whole wedding between him and Fi, I thought usually a girl is the one ot plan the wedding but he did it himself and surprised Fi. It was cute and it made me wish how I could get a sweet guy like him. It’s really surprising when he suddenly becomes jealous over Fi. He wasn’t jealous at all in the first book when Sean has crushing on her. No he became jealous he and Fi gotten married. It’s so silly and I laughed to myself at how silly he had acted towards guys Fi was talking too.

Sean is Fi’s friend and fellow Seeker/Seeder, at first he seemed to be the same as how he acted in the first book but then he totally changed to protect the one he loves. Whether it’s a good change or a bad change we’ll just have to wait and see. He is still all about gadgets still and gets mad when the Truthers destroy a farm that had a lot of computers.

Sara has a complete personality change from the ending of the first book to the starting of this book. Only because she now because with Fi in charge of the seeking (which before was only left for the men) she may have a chance to become who she wants to be. Which is a very strong character. Her reason for this doesn’t make sense to me still but maybe it’s because I’m not all that connected to her but she does the job right. She picks up on skills fast and I enjoy how she can kick ass when the time needs her to be a kick ass type of person. I can’t wait to see what more she brings onto the table in the next book.
Rating
4 out of 5 Howling Wolves