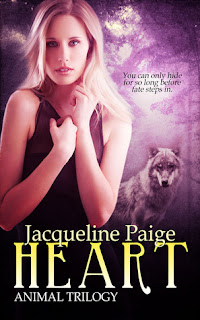 Summary
Three women without knowledge of their true heritage...
Three men that have waited for their mate all of their lives...
Hearts and tempers collide with wild passions and animal instincts
in the Animal Trilogy
~
Heart

Torn from her sheltered life, Rayne is alone and scared after she discovers her fiancé is not the man she thought he was. Unable to accept the corrupt world he belongs to, she flees to the furthest possible location she can reach on her own. Nothing could ever prepare her for the journey and what she finds out when she arrives.

Is she strong enough to survive on her own?

The epitome of the lone wolf, Devin stays in the wilderness and far away from people, avoiding the decision of whether to accept his title as leader and alpha of the pack. One alluring woman stirs up his resolve and passion when she disturbs his solitary world. The man inside is tempted in a way he can’t understand but his wolf knows he’s found his mate.

Can he have her without succumbing to the responsibilities waiting for him?