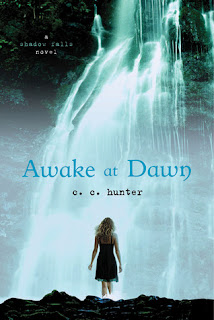 Now that she’s settled in at Shadow Falls Camp, Kylie Galen’s determined to discover the extent of her supernatural abilities.  But with a ghost insisting someone Kylie loves is about die, a rogue vampire on a murdering rampage, and her sixth sense telling her someone is watching her, Kylie’s quest for answers is quickly put on hold.

To make matters worse, just when she’s about to give her heart to Derek, a half-fairy, he starts pulling away.  When Lucas, a werewolf with whom Kylie shares a secret past, returns, Kylie’s feels more conflicted than ever. Her weekend with her mom should have been the just the break Kylie needs, but it turns out to be her breaking point.  Someone from the dark side of the supernatural world has plans for Kylie--and it'll take all her resources to get back to Shadow Falls alive...

Kylie is still confused on what she is, she keeps finding new things happening to her. When she figures she's one type of supernatural something changes and she thinks she's a different type. This confusion causes her relationship with Derek to suffer according to her. Though she also has issues with the fact that other supernaturals mostly Vampires can sense their attraction towards one another. Also her ability to talk to ghosts or to understand them took a full book till she figured out what was wrong, though everyone reading the book knew who the ghost wanted Kylie to save. Derek wants to be with Kylie so bad and it doesn't help that his gift to read emotions is amplified when it comes to Kylie. So when she feels anything concerning Lucas. So knowing that she always feels something for Lucas hurts Derek and he tries to be strong but its to much at times. Not to mention that Kylie has been either avoiding him or doesn't give him the time of day. You also learn that Derek has a few more abilities in this book. Lucas doesn't appear till later on in the book and it causes a larger rift between Derek and Kylie causing them to just ignore each other. You learn why Lucas left the camp in the first book and you learn that he doesn't mind to wait for Kylie he just wants to be beside her. Della is still the same short temper and always arguing with Miranda over everything. Her parents still don't trust her on not being on drugs which I can't understand how parents can think like that even though she proves it to them always. Della soon becomes self doubting herself when she felt like she lost control during her transition from human to vampire. She didn't know if she killed anyone during that time or not so that frighten her but her friends helped her deal. Miranda is still dealing with her dyslexia, though she is getting use to her magic. She is also getting closer to the day she has to take that test and she's stressing over it.

There is a bit more Romance in this book then the last one, Derek and Kylie get closer for a while but then everything is put on pause. Kylie started to ignore Derek because of everything that's happening to her which hurts Derek. When Kylie tries to fix it Derek doesn't want anything to do with her because Derek can feel everything she feels and everything that has to do when Lucas is around. With Lucas and Kylie it's also complicated because Kylie likes Derek but also likes Lucas. So she tells them if they can be just friends even though they acted more like friends in the dream walking but Lucas doesn't mind and can wait.


The plot was great, with her talking to a new ghost trying to figure out what it wants was great. Though it took a while before it dawn on Kylie who the ghost was talking about it worked out well in the end. Then there is the fact that she has two boys she's interested in but doesn't know which to pick. Also she doesn't know who she is and as you read the book you think she is one thing but then something else happens and you think she's something else. I just don't think it could have been anymore better, though I would have wished for some more romance.

The design of this cover is great! not to mention if you hold the paperback copy in your hand you can see how shiny it is. I love the photographs used and how the put the waterfall into the cover. It connects to the book very well, because she does go to the waterfalls this time. The same font is used on this cover as it was on the first book cover. I think it's a good think that they have some connection in the series. And the placement of the author's name is perfect under the title. Everything about this book cover is lovely and I can't wait to get the third book to talk about that lovely cover too.


Overall
This was a great sequel and I highly recommend this series if you like the supernatural fantasy type novel. It has all your favorite Supernatural creatures put into one book. Not to mention it takes place at Camp!! So go buy the first book right away!!!