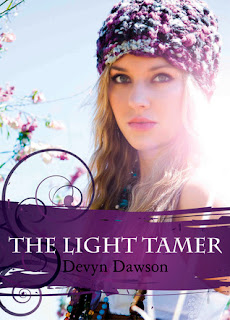 
Jessie moved from New York to North Carolina one week after school let out for summer break. Her newly single mother and Jessie move in with grandma Gayle. Being a teen in a retirement area, is one more thing to add to her 'this sucks' list. It's bad enough to have to move, but even worse her alcoholic father left them as he went on a quest to be an artist in Greece.
Things begin to look up when she is reintroduced to Caleb, the dorky boy that saved her life one summer at the beach. Caleb is no longer scrawny and nerdy, he is now tall, dark and handsome. Caleb is a Light Tamer.

Jessie and Amber become fast friends. Amber is a no frills girl, her snarky comments and sassy attitude will raise a few eyebrows and have you laughing out loud. Amber is rough around the edges, a light tamer with only two years left to find the one she is bound to. Her father's surfing accident left her dad paralyzed and her brother dead.

This paranormal romance will keep you on the edge of your seat with humor, romance, and determination. Fall head over heels for Caleb and Jessie.

My Thoughts on the Book
I went into the book thinking that I would enjoy it. It's an original concept within a genre I normally read. However, I feel that the writer didn't give enough credit for the readers and wrote it in a juvenile style, typical with tween readers audience. It was as if they couldn't decide to make this a tween or young adult book.
I will say this I do like the concept of Light Tamers. I never heard of it before, and I love the idea that they need light to survive. However, the villains of the  book, Shadows (?) steal the light from them. When this happens, then they too become a bad guy. It was interesting to see a twist on traditional myths, as the fates love to change the lives of humans. In traditional myths, they create the path and leave it alone.

However, this book has many serious flaws.. I've never read a book where a girl talks to herself so often. To make it more confusing, her thoughts are heard by Calab (her boyfriend), and yet she still thinks her thoughts while hoping he doesn't hear. It becomes difficult to follow. It's made more difficult with the juvenile writing style. It seems to be written for ages 10-12, but it's not aimed for that audience. It took me a very long time to finish reading this book, as I had to force myself to read straight to the end. It seems that in a realistic situation, someone would be a bit more freaked out if they realized someone could read their thoughts. She barely reacted when she found out that he could read her thoughts. She just brushes it off and goes straight into wanting to kiss him. It didn't seem to phase her when she started to hear his thoughts.

At one point, she begins to think to herself about if he knew how much she loves his kisses. Because he can read her thoughts, now he does! And despite being told by her grandmother (who acts like a teenager throughout the book) that a few Tamers can heal people, she sees herself as a freak because she has this ability. She comes across as a strong character, but she takes everything that happens to her seriously. She wants to grow into her newfound role quickly, and not enjoy the journey.

The character of Amber seems a bit two-faced in her personality. She's not the type of person I would associate with if I ever met her. She talks badly about her diseased brother, and is a bit thoughtless. I can see why she doesn't have any friends when she treats people who try to be her friend badly.

The romance moved a bit to fast for me, and not one that's appropriate for a tween audience. After meeting for the second time in three years, they decide to become a couple. There's a lot of talk about breasts and how the main character wants Calab to touch her. But, because they're bonded, she can feel him touching her skin, despite touching through clothed. She even thinks, "I’m oddly aware that my breast are about to be smashed against his chest.... My breast pressed against him, my hands in his hair... My heart reminding me I’m alive." It's due to this writing, and others like it, that a 10-12-year-old shouldn't read it, although the writing seems to be catered for them

Unfortunately, I found this book to be predictable. The villain is obvious from the start, and when they mention healing powers in the start of the book, it's clear that the main character will have this ability. The only real surprise is with a key scene with the father, although the ending of the scene is sad.

I will give credit for the book's cover artist. They combined the perfect balance of light and beauty to suggest the powers found within the book. The use of the purple to make the title stand out is lovely. The Title fits nicely with the way it's placed at the bottom. The author's name doesn't stand out to much to take away from the over all feel of the image but enough so that you know who wrote the book.

Overall
I think that the base work for a true bestseller is here, but there's internal weaknesses that the author and their editor should have been able to flesh out and strengthen. It was like they couldn't decide what audience to go for, so they combined styles for a multiple audience range.
Rating
2 out of 5 Howling Wolves