The end of Youth Manga Review 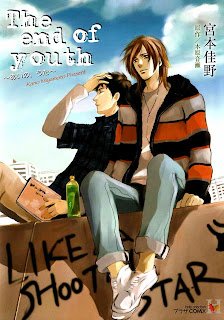 
Summary
There're many reasons 28 year old performer Tagashira Shinichi wants to die but mostly he just stopped caring about life. Then he bumps into Yuu, a former classmate and friend. When Yuu pushes Shinichi to see his little brother again things get more complicated. Can Shinichi find something to live for?

My Thoughts on the Manga
This Manga is a mixure of love and annoyence, it's a love hate feeling for this manga. You love it because the plot is great and you get good flash backs but then you hate it because of how depress Tagashira Sinichi is and how selfish he is. I'm glad it turn out fine for the couple in the end but the lead up was so annoying and I started to hate Tagashira more and more as I read this manga.

Tagashira Shinichi is the most annoying manga character I have read in a long while. He acts like he doesn't care about none of his friends at all which may be true because since his friends couldn't get into the music industry he goes behind their backs and goes into the music industry. He makes one hit then goes down hill after that. Not just that Yuu who looked up to him in high school was completely used and soon ignored and left behind when Shinichi goes into the music industry. It was just to annoying and I couldn't see the perspective from the characters point of view at all. I'm surprised that Yuu took him in and still loved him after what Shinichi did to him.

I'm so surprised that there was even a type of Romance in this book. Then again Shinichi had to sleep with someone just to get jobs but that didn't get him any where so it was pointless. I think Yuu was crazy to take Shinichi back but then if you love someone it's hard to stop loving them.

The plot was okay not the best I've read so far but it's alright, I did like the flash backs those were interesting. I kind of wished there was a bit more to the story to tell what happen after Shinichi gave up on everything to be with Yuu but then it's all up to the author. 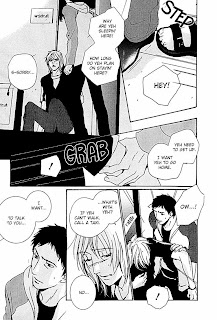 The drawings in this book isn't all that bad actually I liked the way the characters were drawn. Though two of the characters I had a tough time telling apart because they were so similar. They were brothers maybe that's why but it would have been better if the author at least made the younger of the two look great a bit young or a bit more different. Besides that the the characters were drawn semi alright and they do have a bit of detail in the face and hair.


Overall
It was an alright manga not the best I've read but not the worse either, I don't really recommend it either.