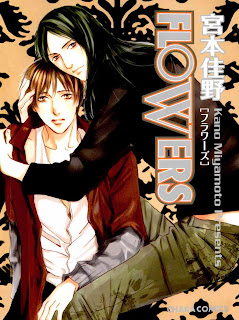 Summery
When Ryou moves into a new apartment block, his neighbour Makoto makes no secret of the fact that he likes men, and Ryou is forced to confront the secret doubts he's always had about his own sexuality. Things get complicated when Makoto's history with the other resident of the building, Nanno, results in jealousy, tension, and love triangles all around.

My Thoughts on the Manga
This manga made me get so mad at times and so upset at other times. It felt like Makoto no matter what he says you think he's only using the pour boy who is Ryou. I just can't stand that type of character. Not to mention you start to feel sorry for Nanno and by the end of it you wish there was more of him.

Ryou only recently started to believe that he's gay, he didn't know if he was before or not. So learning that Makoto is gay he couldn't help but want to be around him. They soon sleep together and then Ryou starts to second guess himself because he figured that Makoto was only using him. He's a shy boy and really innocent so that was probably the reason why Makoto was drawn to him. Makoto is a Model who sleeps with the person he's modeling for. He's actually quite a playboy and sleeps around. Though when Ryou comes it catches his attention right away on how innocent the boy is. Nanno is a character who likes Makoto a lot because they sleep together most often. He didn't like the fact that Makoto has an interest in Ryou and tries to split them up by sleeping with Makoto while Ryou watches. It's a intersting story but you get really annoyed by how Makoto acts and how you feel sorry for Nanno. I just wish there was more to it then just that maybe a side story of Nanno falling in love with someone so you don't think he will be lonely forever. 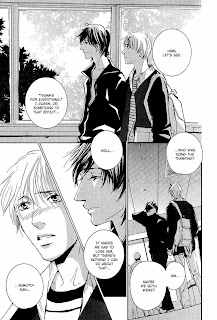 It's not a bad way of drawing the author is really detailed in her manga. The characters also don't look the same they all look different and have different personalties. Though when Makoto cuts his hair short he looks so different it surprises you but you know it's him. I love his new look at the end he doesn't look to be a uke so much with short hair because when I first started to read this book I thought the guy with long hair would be the guy on the bottom haha!

Overall
It's a alright story I would reccomand it because the interaction between the characters are fun and playful.