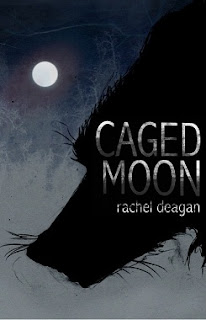 
Summary
Haunted by an animal attack, seventeen year old Charlotte feels she is being followed. When she runs into a mysterious boy while camping, she’s afraid. Nothing seems right about him. Despite trying to stay away, there is an unmistakable draw to be near him. Even his scent smells familiar. But the closer she gets, the faster the secrets begin to unravel. Not only is he not human, he may have a link to her past. When Charlotte finds out someone wants her dead, she is torn between love and fear. Can she trust him to keep her safe?

My Thoughts on the Book
All I have to really say is wow, just wow I loved every moment of this book. Though I did find it went a bit to fast at the end of the book and how Liam/Aiden acted like a stalker kinda creep me other but besides that it was great. The hotness of werewolves! you can't help but drool at how they act and how the change into werewolf form (I'm a werewolf fanatic sorry!!). The way the author describe them in wolves is so amazing the sound just so beautiful. Though I did wonder what happen to that puppy at the beginning of the story it kind of disappeared. . .

Charlotte's past made up for how she acted in the present day. If it wasn't for that wolf attack she probably wouldn't have been so exciting as a character. With her past included it made her relationship with Liam a lot harder. Though she does learn to over come her fears to get to know Liam and the rest of the pack. She ever gets brave enough to not really mind being around them as wolves. As for Liam he's kind of scary with how much he starts to stalk her but besides that I like him as a character. He protective and loves to goof off with his pack mates. Not to mention he's really relax and cares so much for Charlotte though they just met. Then there is the pack mates each has their own personalities which works well in their pack. It's just so great to see the interactions and I also kind of feel sorry for the youngest cause he's always being picked on.


As for the Romance I have to say it all came to fast and I don't think normal relationships move that fast. They just met and the attraction and wanting to be together is all there. Then again with him being a werewolf it kind of has to be like that. Though I do find the relationship between to too right and sexy all at the same time because of the chemistry between them.


The plot was great, from what happen in the past with her being attacked by a wolf to the future where she thinks she's being followed by wolves. The meeting with Liam was also inventive and great I loved the interaction between the two during the first meeting. Then you learn about Liam and his past as well as the rest of the pack members it was all great and you will really love the plot line to this story. What I found disappointing though was that the story moved to fast, it felt like the ending of the book was rushed. I didn't think there was any point to rushing the ending the author could have token her time and made the story a bit longer so it didn't seem rushed.

The cover is just so plain it's kind of annoying. I love werewolf books but this is just to annoying to look at. I wish for something a lot more interesting maybe even a person on a cover with a wolf or maybe a silhouette of a wolf and a girl. Having just a wolf there with a moon/sky background is just not very eye catching. It makes me feel like I should redesign the book instead. The title of the book isn't all that bad I don't mind the grudge feel of the type and the author's name is fine underneath the word.

Overall
I love this story, though again I wish there was more to it then just this. Otherwise I do recommend this book and I'm sure you will love this book as well if you like werewolf stories.