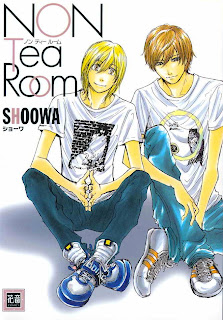 
Summary
Renji and Kenta are musicians, they meet each other thanks to the friendship between their bands. Each musician has different reasons to play, be it love for the music, a strong desire to surpass their fears on stage or even just for someone's approbation.

While these bands are struggling to be known in such a competitive world, Kenta is struggling with a different problem in his love life; can he be a replacement for someone else?

My thoughts on the Manga
This story is great I loved every moment of this manga, it was cute and had a few laughable moments. It was a bit confusing, i don't know if the person on the website got the chapters mixed up or it was suppose to be like that because something else happen between the two pages.

Renji is a cute kid, well 20 year old. . .he's very loveable and he just adores Kenta from the first moment he meets him. He loves hanging with him but can't help but still have small feelings for Arthur who is part of his band. Though he soon starts to develop feelings for Kenta and gets mad at his bandmate for telling Kenta the truth about their past relationship.  Kenta is just so amazing as a Seme, he's on top but he blushes so much and he's so immature it's just to cute. He loves his band but he wants to focus on college and his future so he can't be in the band for long but he will still play his guitar for Renji. Kenta never expected to fall in love with Renji when he first meets the boy but then he couldn't really stop loving him.

The romance is a bit fast but then it's cute at the same time so I didn't really mind it. At first you can tell right away what Kenta's feelings were but you Renji took a while to figure out. I couldn't tell if he was still in love with his ex or not, I guess that's what makes the story so interesting for that. 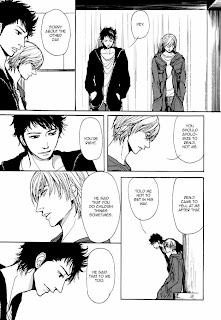 The design is simple but the characters are drawn really well. I love how each character is different and that there is some detail. Not all panels are design a lot behind the character but sometimes there is. By the way the character speaks and his faciel features you can tell what that character is feeling.

OverallI loved the manga but it didn't make me go crazy for it. Though if you like a cute seme in the story I suggest reading this it's funny.