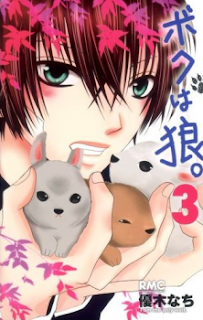 
Summary
Rina hates perverted guys. She mixes up her new classmate, Ookami-kun with someone else...
But the truth is, he is a real wolf! Is this sensation of the beginning of love!? Or is it a story of licking bunnies!? Only time will reveal the answer.

My Thoughts on the Manga
This manga is so funny and so sweet at the same time. It's a new twist on the term raised by wolves because the boy in this manga really was raised by a wolf and how he comes to terms with things like releationships because he doesn't know anything and so it's the girl Rina who has to teach him things, though she's afride of boys.

Rina is a fun girl who really doesn't like boys. She's afide of them thinking that they are all perverts and all they want is sex. She doesn't trust any of the boys even one of her friends who had a crush on her for a long time but Rina still calls him a pervert even though he's trying hard not to be one around her but she doesn't see that. The new boy Ookami comes and acts not like normal guys. Rina's first incounter with him, was that he was nice and didn't know much about anything, he doesn't even know what a pervert is. So Rina thinks she's found her perfect man but then things didn't go so well when Ookami comes and sniffs her butt. She freaks out but soon learns that Ookami was raised by a wolf for the first seven years of his life then put away to learn how to be human again in a room. It's quite funny to see how their releationship progresses through the manga.

The romance between the two is long and hard because Ookami knows nothing on releationships and Rina being scared of boys has to somehow show him the right away to treat her without being a pervert. Though she soon comes to relaised that most of the things that are perverted (like kissing) she has to teach him. She even had to ask him out on a date herself which surprised everyone and had to show him the meaning of dating too.

The plotline was great seeing the way she becomes more and more less afride of Ookami was cute. Also to see Ookami acting more and more like a real boy but still having a few moments of where he doesn't understand some stuff was cute as well. You will laugh and be sad at a few parts in the manga but in the end this plotline will draw you in and you will love reading it. 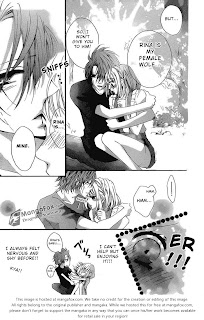 The style of drawing as you can see is the normal shojo style look. The characters are all unique and all cutely drawn. There is also a lot of chibi moments in this book but the overall design of the characters was really well done. The mangka loves to put designs in the background or detail depending on the emotions running through each pannel. She puts detail into the hair and eyes and you know exactly how they are feeling by the expressions on their faces. Not to mention Ookami is a cutie isn't he!!!


Overall
I recommend finding this manga and reading it, it's really cute and you will love the storyline!