The Calling by Kelley Armstrong Review 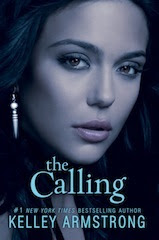 Summery
Maya and her friends--all of whom have supernatural powers--have been kidnapped after fleeing from a forest fire they suspect was deliberately set, and after a terrifying helicopter crash they find themselves pursued by evildoers in the Vancouver Island wilderness.

My Thoughts on the Book
All I can say is wow, this book is just plain wow!!! I couldn't believe the follow up to the first book was just so damn good. Kelley Armstrong knows how to write her books and I just love how she written this volume. It's full of action and adventure not to mention a little romance at the end. It was just full of surprises. Not to mention the way she describes Maya turning into a cougar and how she acts like a cougar was so beautiful. This book just makes me want to read the third book right now I don't think I could stand waiting so long for the third book.

The characters in this book grow closer together, they become close friends when before they didn't get along to well. Not to mention a surprise look into one of the character realizing she isn't as nice as you seem to think she is. Maya and Daniel take up the leader role in this book, leading everyone and making the tough decisions. Maya also learns to relay more on her gifts of her skin walker gene to get them through some tough situations. She soon starts to learn more about what her and the others are and what it meant to live in that small Vancouver town. It's the same with Daniel he learns more about himself and what he really is. He learns about what his gifts are and what type of supernatural he is. He leads the group with Maya making decisions that are best for them. He never leaves Maya's side and cares a lot about her, now whether he has feelings for her or not I don't know but I really do love their friendship. You also learn more about Sam, Nicole, Hayley, Refe and Corey in this book then you would have ever guess there could be more to them then just that. Having them in the story made it more interesting with the interaction of the characters together. Not to mention some arguments but that what makes the situation somewhat better.

There was very little romance in this book because it was focus so much on them trying to escape the people after them. Not to mention when your in the forest and scared to death on being captured who can have time to focus on romance. Though there was a few scenes that make you go "Yes!" in your head and just want them to kiss all the more. Ohhh it was so cute I loved that scene so much. I'm not going to spoil but you will love it believe me.

The plot was great, every moment of it kept you wanting to see if what happens next. They had to keep escaping from people who wanted to capture them but it was hard when those people knew how to catch them somehow. It was great and lots of things happen that makes you wonder how you couldn't have believed it would be like that. You also learn how Serena actually died and it's truly sad when you learn the truth.

The cover design is just so eye catching and pretty just like all of Kelley Armstrongs other series book cover. The photograph draws you in with the way the girl is staring at you and the way her earring stands out so well in the picture. Then there is the title to the book, the smaller "the" compared to "Calling" fits well in that small space. Then there is the author's name which I don't find abstracting your view of the overall image of the whole thing.

Overall
This book was as good as the last volume probably even better with all the action and adventure in it. It will leave you wanting more but that's the price to pay when you want to read what happens next in The Gathering series.