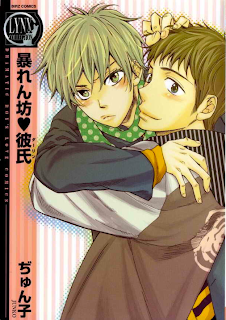 
Summery
1) Naoto is Hajime's childhood friend. Naoto may look cute but then again, his attitude gets to everyone's nerves. Even though Naoto's like that, Hajime still has his eyes on him. But, the problem is, Naoto hates homosexuals, so much that he wishes they will become extinct and rot in hell!!


2) Shinji has always loved his younger brother, Haruki more than any older brother should. Yet when he receives an unexpected warning letter demanding payment on a delinquent loan, he is left speechless. With everything Haruki could ever ask for, provided by loving parents, he demands to know what it could be that would cause Haruki to be so greedy and so irresponsible. Can Shinji really handle the truth behind Haruki's unusually selfish actions? or will he give up on Haruki all together?

3)After his parents divorce, Hara Shuuji left Tokyo to live with his mother and attend the local school. With hopes of starting a new and peaceful school life Shuuji feels at ease when his first day starts out well. That is until a problem arises, a problem named Yoshie Kennichi, who carries the name of a "delinquent" with pride. Shuuji's first impression of Yoshie isn't good, but what's worse, is that his ideals for a peaceful school life are ruined when Yoshie suddenly recognizes him! Shuuji, a new student, has no idea how Yoshie can possible know him and frantically wonders, what in the world is going on!?

The first story were alright, Naoto is really funny character. Like the summery said he may look cute but he has a bad attitude where he likes to hit people if they flirt with him. Hajime has to be there before that happens. Hajime is really cute for liking Naoto for so long but never got the chance tell the other his feelings because Naoto hates gay people. That changes when Hajime gets into a accident and Naoto comes to visit. It's funny what happens between them and how it ended up where they started to date. Naoto still not use to the idea of dating never lets Hajime do anything else, so the romance is slow but slowly he opens up and lets Hajime love him. It's a sweet story and I love how it ends.
The second story Shinji and Haruki are step brothers who live with each other. Shinji is the older brother who looks out for Haruki and secretly loves him. Haruki has a problem where he loves to pick up girls and sleep with them which left him in a debt and causes Shinji to yell at him but Haruki doesn't listen. One night when Shinji catches Haruki about to go out to pick up another women Shinji tells him he would be with Haruki. It's kinda exciting to read what happens next and you learn Haruki true feelings. Then it shows a story from the past where Haruki caught Shinji and stuff it's great and I really do love this story.

The last story the characters are funny, you have a deliquient Yoshie who is only nice to Shuuji. Shuuji can't help but think of Yoshie as that young kid from piano classes but seeing him at the school he is surprsed by how different he is. Yoshie see's nothing wrong with this and continues to hang off of Shuuji and always asks him to the piano room to play for a bit and to let him sleep on the matress. Shuuji learns later that, that room is actually used by the bad boys of the school who bring girls there to have sex with. When Shuuji learns this he gets mad and it's just so cute how they learn to be together and stuff and how Shuuji learns to love Yoshie as he is now and not who he was in the past. 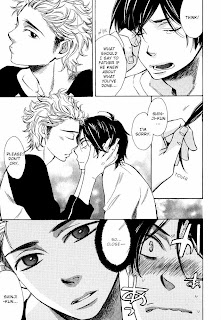 I do love the way this manga is drawn. It looks like the mangaka takes the time to draw each scene of the manga.There is detail in the eyes, hair face everything. Though not every scene shows a background but where there is background it's so very pretty. The author knows how to draw really well and it works great in this manga. It's just great time spent into this short story manga I wished it was longer to see more of her pretty drawings.